LONDON (REUTERS) - Arsenal's new manager Mikel Arteta said his team let themselves down with poor split-second decision-making in their 2-1 defeat by Chelsea in his first home game in charge on Sunday (Dec 29).

A mistimed leap from goalkeeper Bernd Leno handed Chelsea an easy equaliser from Jorginho in the 83rd minute to cancel out Pierre-Emerick Aubameyang's first-half strike.

Chelsea then surged forward and Tammy Abraham spun and shot straight through Leno's legs for the winner four minutes later as Arsenal were caught out in defence.

"I am really disappointed with the result and the way we conceded the goals and the timing of it," Arteta told reporters.

"It's decision-making. It happens. It will happen again for sure, but when it happens against this type of opposition, you get punished," he said.

"We had to sustain that level for longer periods against a very, very physical team like Chelsea. We have to move on."

However, the Spaniard was keen not to place too much blame on the shoulders of his German keeper.

"He will be down, and when an error costs the team points we have to lift him. He's done a really good job since he joined this football club and we have to respect that," he added.

Arteta was evasive when asked whether he felt Chelsea midfielder Jorginho should have been given a second yellow card for bringing down Arsenal's Matteo Guendouzi.

"That's up to you guys to decide," he said with a wry smile, before adding: "For me it was very clear. That's it."

He said his side kept a good shape throughout the match but got caught out by Chelsea's speed when they regained the ball. 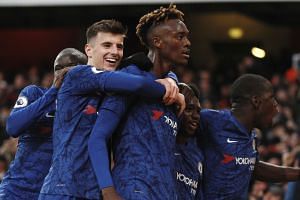 "It was the structure that we need to control those type of situations. And then we just stepped back - and they are really good in transition," he noted, referring to the move that led to Abraham's late winner.

The result leaves Arteta with a draw and a loss from his first two matches in charge, with the Gunners in 12th place and with a negative goal difference after 20 matches.

Arteta gave a cautious reply when asked if Arsenal were in the unfamiliar position of fighting not for Champions League places but to avoid relegation, saying only: "We have to go step-by-step, so I don't want to make any predictions."