LONDON (REUTERS) - Arsenal midfielder Granit Xhaka has asked Unai Emery not to be picked for Saturday's Premier League match at Leicester City and the manager said they would wait until he is in the right frame of mind to play for the club again.

Xhaka reacted angrily to home fans booing him after he was substituted during Arsenal's 2-2 draw with Crystal Palace at the Emirates Stadium last month and the Switzerland international was stripped of the captaincy as a result.

With on-loan midfielder Dani Ceballos also injured and unavailable, Emery said Xhaka was not in his plans but Mesut Ozil - who has played only twice in the league this season - was in contention.

"I spoke with him (Xhaka) on Tuesday, for how he is feeling now and his mind, because he is working well and training well. But he said he can't play at the moment and we are going to wait," Emery told reporters on Friday (Nov 8).

"(Ozil) is training well and I think he is now being consistent in the training, he is also helping and being positive. I am thinking he has a possibility to play tomorrow."

With Xhaka no longer an option for the captain's armband, it has been passed on to Pierre-Emerick Aubameyang and Emery said the Gabonese striker had the qualities to lead the squad.

"Aubameyang is first (captain) because he is experienced and he has the respect of the dressing room," the Spanish coach said.

"He was the top scorer last year in the league and I know he needs time to take that responsibility 100 per cent but we will support him.

"Every player will support every captain and we are going to support him as first captain because he took a step ahead to take that responsibility." 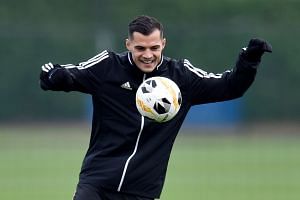 Fifth-placed Arsenal are six points behind Leicester and Emery has been under pressure to deliver after winning two of their last nine league games but he said he had not been in discussions with the board regarding his future.

"We are speaking about our process to continue working and they (the board) did not show me doubts," he said.

"I was speaking with the players this week about how is our next step to improve and it's clear there are two ways. One is to play better with the ball, play with more confidence with our style, and take more responsibility on the pitch."