LONDON (REUTERS) - Arsenal manager Arsene Wenger rued his team's defensive errors after their 3-0 loss to Manchester City in the League Cup final on Sunday (Feb 25), but he also said the video replay system should have ruled one of the goals out.

The north London club have now lost a record six League Cup finals - three under Arsene Wenger who has never won the trophy - while City have triumphed three times in five years.

"We self-inflicted our punishment", the Frenchman told a news conference after the game at Wembley Stadium.

"You can never say you're not disappointed when you concede goals the way we conceded goals. But you take the good and the bad when you're the manager and that's part of the game."

Goals from Sergio Aguero, Vincent Kompany and David Silva gave City an easy win in the first ever domestic final clash between the sides.

Former Tottenham Hotspur striker Teddy Sheringham told the BBC: "If Arsenal were going to have a chance today they all needed to be 9-out-of-10s, and I don't think any of Arsenal's players were more than a 5-out-of-10 today - no-one performed.

"Arsenal's fans will be more disappointed with the performance than the result," he said.

Wenger said Kompany's goal in the second half should have been ruled offside by the Video Assistant Referee (VAR), being used on Sunday for the first time in a cup final in England.

"The second goal is offside. I don't know, we accepted the VAR, I just watched it again. It's a mystery for me how you can watch that on replay and not give offside," said the Frenchman.

He also defended his decision to field three at the back instead of four, saying that formation had worked well for the team before, including against Manchester City. 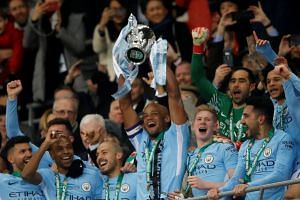 "The goals we conceded could not be explained by the fact that we played with three at the back. I don't think the system was especially questioned on that," he said.

Arsenal are sixth in the Premier League standings, 10 points behind the top four Champions League qualifying places, meaning their most likely way into Europe's elite club competition next season is by winning the Europa League.

But Wenger insisted the focus would be on their next Premier League fixture rather than their last-16 tie against European heavyweights AC Milan in the continent's second-tier event.

"We have to prioritise the next game first before we concentrate on the Europa League," he said.

Arsenal's next fixture is at The Emirates on Thursday against runaway Premier League leaders Manchester City, who are 27 points above them and already heading for the title.

"They will be on a high, and we have to recover from the disappointment," Wenger said. "On that front, they have the advantage."