NYON (AFP) - Arsenal will take on CSKA Moscow after the clubs were drawn together in a Europa League quarter-final in Nyon on Friday (March 16) at a time of strained relations between Britain and Russia.

British Prime Minister Theresa May this week expelled 23 Russian diplomats over the nerve agent poisoning of a former spy, and said British royals and ministers would not attend the World Cup in Russia this year.

The first leg of the Arsenal-CSKA tie will take place in London on April 5 with the return leg in the Russian capital on April 12.

Arsenal posted a statement on their website drawing the attention of fans to travel advice issued by Britain’s Foreign Office, which said: “Due to heightened political tensions between the UK and Russia, you should be aware of the possibility of anti-British sentiment or harassment at this time.

The competition represents Arsenal’s only remaining chance of winning a trophy this season and their sole chance of qualifying for next season’s Champions League.

Atletico Madrid, who won the Europa League in 2010 and 2012 and were losing Champions League finalists in two of the last four seasons, are the most imposing of the quarter-finalists. They take on Sporting Lisbon, with the first leg in Portugal, for a place in the last four.. 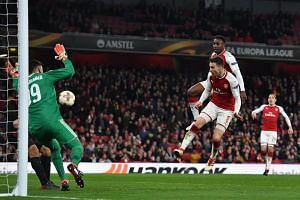 Marseille, the only former Champions League winner left in the competition, face rising German force RB Leipzig, who are competing in Europe for the first time.

“PSG and Lyon are gone. And the final (of the Europa League) is in Lyon. We are the only French side left, nobody was thinking about us but here we are. We are very happy to be in the quarters.

“Represnting France in a compatition whose final is in France, Lyon is not far from us, it’s really quite something,” said Zubizarreta.

Austria’s Red Bull Salzburg, finalists in 1994 but very much the minnows of this year’s last eight, travel to Rome for their first leg against Lazio.

All the matches will be played on April 5 and April 12.

The final at the Parc OL in Lyon is on Wednesday May 16.