LONDON (AFP) - Antonio Conte has warned David Luiz he faces a fight to win back his Chelsea place after the Brazil defender was dropped for the 1-0 win over Manchester United.

Luiz paid the price for some sloppy performances as Blues boss Conte left him out of the squad at Stamford Bridge on Sunday.

The former Paris Saint-Germain star, one of the key players in Chelsea's title triumph last term, watched from the stands as Andreas Christensen, Cesar Azpilicueta and Gary Cahill filled the central defensive positions for the champions.

Conte had been prompted to ditch Luiz following the 3-0 midweek Champions League loss at Roma. But, having told an television interviewer after the United game that he did not know if the defender had a future at Chelsea, when he faced the written press, he only said Luiz he would not be granted an immediate recall.

"I decided this way tonight, maybe I can decide a different way in the future or I can continue the same way." 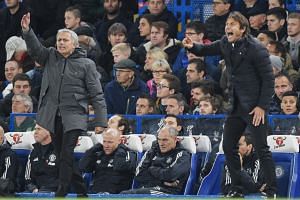 His decision to axe Luiz was as much a warning to the rest of the squad to improve their performances as an individual attack on the centre-back.

The Italian's message was received as Chelsea gave a commanding performance to secure their third successive league win and stay within nine points of leaders Manchester City.

"I must take the best decision for the club, not a single player. It is only a tactical decision. It's normal," he said. "This can happen to every one of my players if I see they are not in good form. I have to make important decisions."