LONDON (AFP) - Chelsea manager Antonio Conte stirred up his feud with Jose Mourinho by ignoring the Manchester United boss at the end of his side's vital 1-0 victory on Sunday (Nov 5).

Conte and Mourinho have traded barbs on several occasions this season and only this week the Italian claimed it was a miracle Chelsea managed to win the Premier League last season given the mess he inherited from Mourinho.

The United manager, sacked by Chelsea for a second time in December 2015, had irked Conte by criticising his habit of complaining about injuries this season.

Conte responded to that jibe by telling Mourinho, Chelsea's most successful manager with three Premier League titles, to stop talking about his former club. 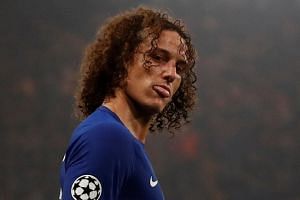 And, after Alvaro Morata's 55th-minute header handed Mourinho a third successive defeat at Stamford Bridge, there was no sign of a thaw in the relationship.

Conte raced onto the pitch to celebrate with his players and fans instead of shaking hands with Mourinho, who waited on the touchline and spoke to several members of Chelsea's coaching staff.

Asked about the incident, Conte hinted his lack of respect for Mourinho was behind the snub.

"It's not important. It's important to win the game. You have to have the respect on the pitch not outside the pitch," he said.

Mourinho, who has in the past refused to shake hands with Arsenal boss Arsene Wenger, insisted he had done all he could to instigate a handshake with Conte.

"You don't want me to chase him into the middle of the pitch," he said. "I shook hands with the people who are there (on the touchline). I think one of them was his brother, his assistant.

"I feel I did my duty. I cannot go to chase him.

"He doesn't have to wait. There is no problem with it at all. You are always worried with these things."