When Tampines Rovers added star signing Jermaine Pennant to their ranks at the start of the season, many expected the former Arsenal and Liverpool winger to spur the Stags to the S-League title.

But with the first half of the season gone, Tampines find themselves in second spot on 28 points, seven behind league leaders Albirex Niigata.

Pennant has come in for criticism from some sections of the media, who have commented that the former England Under-21 international has yet to light up the league wh his performances.

But with two goals in his last two games, the first time this season he has scored in consecutive matches, he could be finally showing the form many are expecting of him - which could spell trouble for Balestier Khalsa at Jalan Besar tonight. 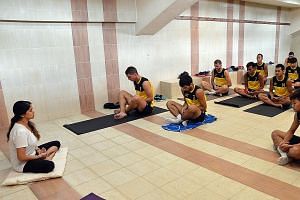 Balestier get dose of Niko tonic

Said his coach Akbar Nawas: "Pennant has been on fire for us, especially in the second half of the season where every match becomes more crucial. He's always been consistent and also has been doing well now for the club after the mid-season break. I believe that he can continue his good run and help Tampines do well in the league to catch Albirex."

Pennant has bagged five goals and eight assists in 14 outings these season, and Akbar said that when it comes to judging the performances of his star, it is a subjective matter.

The 40-year-old said: "For me, Pennant's been performing fine. I don't think he has done anything wrong. Everyone has their own opinion and that's fine.

"With his background, there will be certain expectations - that's something you can't escape. However, the team is not just about Pennant. There shouldn't be so much pressure on him.

"People talk about his contributions on the field but they don't see what he does off it. In training, he's always working hard and never fails to help the other players along - especially the younger ones."

Team-mate and Singapore striker Fazrul Nawaz concurred: "He needed some time to adapt to the culture and local style of football here, which he has been doing well.

"Considering his age (33) and culture of football he comes from, it wouldn't have been easy to make his mark in the S-League and obviously, we also had to adapt to his playing style but his experience has counted for a lot in our squad.

"The criticism around Pennant is fair because of his high calibre and people have the right to say what they want but at the end of the day, if he delivers, that's enough."

Pennant himself feels he has found his stride in the league and likes his football here.

"I've settled in quite well and I've been putting in the best I can," he said. "It's always difficult when you go to a different lifestyle and a different culture and sometimes it takes a while to get comfortable but I've done that pretty quickly.

"There's always this hype around me and people talk about me living up to my name but I don't really let it matter. I only focus on the actual matches we play and want to go out there to put in a performance."

He will be looking to do that against the eighth-placed Tigers, saying: "The game is ours to lose. They've a new striker and are in good form but 10 goals in the last two games show we can score also.

"We're chasing Albirex and have to pick up the victory when we can because they also can't go without losing a match, so we've to be ready to take advantage of that once they drop the points."