AMSTERDAM (REUTERS) - Ajax Amsterdam coach Erik ten Hag has said their Champions League elimination was a "bitter blow" and that they had thrown away their chance to reach the knockout stages.

Ajax needed only a draw in their last Group H match at home to Valencia on Tuesday (Dec 10) but were beaten 1-0, a result that saw them finish third and dropped them into the Europa League.

"We were already on the verge of qualifying two games ago already," ten Hag said, referring to their 4-4 draw at Chelsea in early November when Ajax were three up with less than 30 minutes left to play.

"That makes it even more bitter. We deserved to go through but we had let it slip through our own hands. We have to look at ourselves."

It is a deflating end to a stellar year in the Champions League for Ajax, who eliminated Juventus and Real Madrid on their way to last season's semi-finals, where they lost in the last minute to Tottenham Hotspur.

After navigating the preliminary rounds this season, they again looked comfortably placed in the group phase with 10 points before Tuesday's outing.

"We gave away an unnecessary goal and were left to chase the match," ten Hag added. "We gave away the ball for them to score and that cannot happen at this level."

Brazil-born Spain international Rodrigo scored the game's only goal of the match in the 24th minute as 10-man Valencia finished top of Group H.

Chelsea, 2-1 victors over Lille, also on 11 points with Valencia, ended in second place by virtue of the head-to-head result between the two teams. 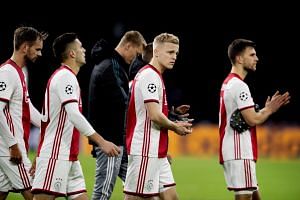 Football: Ajax crash out of the Champions League after defeat by Valencia

"We put in such an effort against Chelsea and didn't get the job done, but this side doesn't get tired of working miracles and we've done another tonight," the elated Rodrigo told uefa.com.

"I'm delighted because this side is a big family. I don't have the words to describe my team mates. These last three years we've created something special and we're so together. We've taken a great club back to where it's not been for a long time."

Ajax looked flat and listless in going down to the Spanish side, who ended with 10 men after the sending off of Gabriel Paulista in stoppage time.

"We've had a very good group stage, and to finish top of the group is something. It's all down to the boys," he said. "Since I came into this club, I told the boys I'm lucky to coach a group like them, with such incredible values and the way they triumph over adversity."