LYON, France (REUTERS) - Ajax Amsterdam weathered an Olympique Lyonnais storm to reach the Europa League final 5-4 on aggregate after suffering a 3-1 away defeat on Thursday (May 11).

They will face Manchester United in the showpiece match in Stockholm on May 24 after the Premier League side beat Celta Vigo 2-1 on aggregate after a 1-1 draw at Old Trafford.

Kasper Dolberg opened the scoring but Alexandre Lacazette's double on the stroke of halftime put the hosts ahead and second-half substitute Rachid Ghezzal added another after the break.

But Ajax held firm to reach their first European final since 1996.

The Lyon defence was often outpaced in a lively start to the game and midway through the first half, Ajax were rewarded. 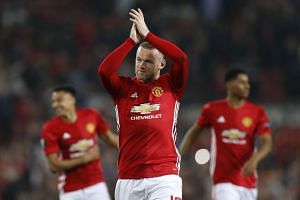 Dolberg put the visitors ahead after 27 minutes, chipping the ball past Anthony Lopes after being set up by Younes, who benefited from some poor defending by Rafael and Nicolas Nkoulou.

Lacazette was brought down in the area just before the break and he converted the resulting penalty to give Lyon a lifeline.

One minute later, Lacazette gave the home side the advantage on the night when he latched onto a pass across goal from Nabel Fekir.

Ajax were on the back foot early in the second half, but Lyon lacked accuracy, until Ghezzal's 81st-minute deflected header gave the Parc OL hope.

Maxwell Cornet's strike in the 87th whizzed past the post as Lyon increased the pressure, but the visitors held out until the final whistle.