LONDON (AFP) - Manchester City take on Chelsea on Sunday (Aug 5) in the Community Shield at Wembley, the traditional season-opener between the Premier League champions and the FA Cup winners.

Here are five talking points ahead of the game.

Will Sarri put down roots at Chelsea?

Maurizio Sarri, 59, has not had long to prepare for the new season - joining Chelsea midway through July after Antonio Conte was finally sacked following a turbulent period at the helm.

The former Napoli manager likes to play attractive, attacking football and City are likely to respond in kind, which should make for an exciting match in the stifling summer heat.

But Sarri will be aware that not even trophies have been enough to save the jobs of previous incumbents at Stamford Bridge, with Conte dismissed after winning the FA Cup.

Despite the pressure Sarri, who has never won silverware, is thinking about the long term. 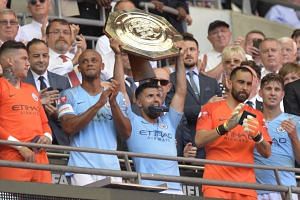 Football: City back in the groove as Aguero ruins Sarri's Chelsea bow

Can Man City pick up where they left off?

Manager Pep Guardiola has been relatively quiet in the transfer market this summer, compared with last year's splurge, with Riyad Mahrez his only addition of note.

He knows last season's record-breaking feats mean nothing this season as they attempt to become the first team since Manchester United in 2008-09 to retain the Premier League crown.

"I've had this situation in Barcelona and Bayern Munich and we were able to repeat and make back-to-back (wins)," he said.

"Here maybe because it's more complicated for the contenders. All the teams are good, that's why every time we reflect with perspective what we have done last season I am really impressed."

Taking place just three weeks after World Cup final, the Community Shield will not be a blood-and-thunder contest between the strongest line-ups Manchester City and Chelsea can field.

City have yet to welcome England's Raheem Sterling and Belgium's Kevin De Bruyne back to training and may be reluctant to give other star names an extensive workout.

Chelsea pair Olivier Giroud and N'Golo Kante won the World Cup with France and continue to sit out, as do Belgian trio Eden Hazard, Michy Batshuayi and Thibaut Courtois.

But the high-profile absences will give a chance to young players from both clubs to showcase their talents, with City's Phil Foden and Chelsea's Callum Hudson-Odoi hoping to make their case for regular first-team action.

Where will Mahrez play at City?

City missed out on Mahrez in January but have now got their man for a club-record £60 million (S$107 million).

The size of the fee suggests he will have a key role at the Etihad but it is not clear where he will fit into Guardiola's fluid system alongside other fleet-footed attackers such as Sterling, Leroy Sane and Gabriel Jesus.

Director of football Txiki Begiristain said Mahrez's attacking qualities would add even more of a cutting edge to the side.

"Riyad is a hugely talented player. He beats defenders and creates space," said Begiristain, adding: "We're sure he will bring additional attacking quality to our squad."

Sarri's biggest signing so far has been Jorginho, his trusted lieutenant from Napoli. The Italy international midfielder chose to stick with Sarri despite interest from Guardiola.

But the City boss is sanguine despite the disappointment of missing out on the player.

"It was not a blow - the blow would be to come here when he prefers Chelsea," he said. "Nobody put a gun to his head to come. We were so close, we believed it was done, but at the last turn he decided on Chelsea."