Bernd Storck described Hungary's return to major tournament football for the first time in 30 years as a miracle. The Hungary manager also said it would take a miracle to beat Austria. Miracles happen.

Rank outsiders to win Euro 2016 and underdogs in their Group F opener, Hungary stunned their neighbours at the Stade de Bordeaux.

Adam Szalai, who played for German club Hannover 96 last season and was without a goal in 59 matches, opened the scoring in the second-half by poking the ball past Austria goalkeeper Robert Almer.

Substitute Zoltan Stiber then sealed the points in the 89th minute with a cool chip over the stranded Almer.

It was perhaps fitting that Almer's opposite number kept a clean sheet. Hungary stopper Gabor Kiraly was rarely tested on the day he became the oldest player to appear at a European Championship but made a save of note when the scores were level.

He displaced German great Lothar Matthaeus (39 years and 91 days old at Euro 2000). But more significantly, helped his side record a memorable result. 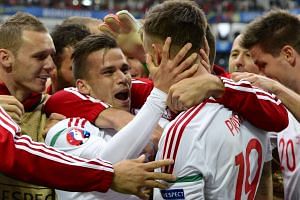 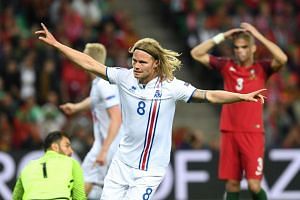 - David Alaba shot from 20 yards and hit the post after just 28 seconds. An inch to the left and that would have been the fastest goal in European Championship history. Russia's Dmitri Kirichenko goal against Greece - 68 seconds after kick-off - in 2004 still holds that record.

- Austria striker Marc Janko nodded the ball down into the path of Zlatko Januzovic in the 35th minute. Januzovic's volley was turned around the post by Kiraly.

- An audacious heel flick by Marko Arnautovic started a one-two move. After getting the ball back, the Stoke City star tried to set up Martin Harnik but his team-mate could only put the ball wide.

- Dzsudzsak has another go in the 57th minute. This time, he was more central but further out. His effort from 25 yards is saved by Almer on the stretch.

- Szalai played the ball to Laszlo Kleinheisler and got it back. The striker fired past Almer from inside the box to give his side a 63rd-minute lead.

- Martin Hinteregger thought he scored but the referee has blown for a foul. Aleksandar Dragovic got a second booking for a late challenge on Tamas Kadar. Austria down to 10 men.

- Austria have a free kick in the 89th minute. But Hungary counter-attack from it. Substitute Zoltan Stieber found himself through on goal and he chipped past Almer.

Can an underdog go all the way? The latest edition of the continental showpiece has been tipped as the most open contest in years. In a season when 5000/1 no-hopers Leicester City won the Premier League title, can there be a fairytale in France?

Hungary - 250/1 to win Euro 2016, with only debutants Albania having longer odds - were not expected to beat Austria, who were unbeaten in qualifying, winning nine matches. Hungary qualified via winning a play-off tie against Norway. They survived an early scare from Alaba but had more shots on target than Austria (8-3). They also shaded possession (52 per cent to 48 per cent) - and were winning that department even before they had a numerical advantage.

Kleinheisler. The midfielder was involved in a number of decent attacks in the opening period. His pass before the break set up Dzsudzsak for Hungary's best chance in the first half. He had a more telling touch after the break. His involvement in a one-two with Szalai split the Austrian defence up for the opener.

What the result mean

The pressure on Austria to make the knockout stages has escalated. The dark horses to win Euro 2016 have it all to do against Cristiano Ronaldo and Portugal on Saturday.

Perhaps the one consolation for Marcel Koller's men is that the four best third-placed teams will progress to the round of 16. But the team that finishes third in Group F is set to face the winners of Group C or D. That, at this stage, represents either world champions Germany or holders Spain.

They could yet finish in the top two but Portugal and Iceland are - on paper - their tougher fixtures.

Hungary, meanwhile, will attempt to continue to belie the odds when they face Iceland on Saturday.

Hungary's win marked the longest spell between victories in European Championship history. Their last win was over Denmark in June 1964. This result ended a 52-year wait for a victory.

Storck: "A huge compliment to my team... At the start you need a bit of luck - which we had with the shot from Alaba on the post - but then we were more secure and the players woke up. We always tried to score going forward and what we did in the second half was brilliant."

Austria manager Marcel Koller: "It was a good start to the match. We had some good combination play. But the more the match went on the more nervous we go... and we let the Hungarians in."