MARSEILLE, France (Reuters) - The Euro 2016 game between Russia and England ended with scenes of mayhem on Saturday as scores of Russian fans charged into a section full of rival supporters, throwing missiles, tearing down flags and fighting with anyone who remained in their way.

Thousands of England fans were forced to retreat, many climbing a high fence and pouring into the exit gangways, while a ring of stewards stood on the pitch watching events unfold while taking no action.

Groups of Russian fans even advanced from ground level up to the second tier of the vast 67,000-capacity Stade Velodrome before a handful of stewards eventually stepped in to form a ragged cordon.

Russia had scored a stoppage-time goal to draw the Group B match 1-1, sparking wild scenes of celebration among their vastly outnumbered group of fans, who had earlier fired two rockets across the pitch.

According to Russian media, however, England supporters provoked the violence. 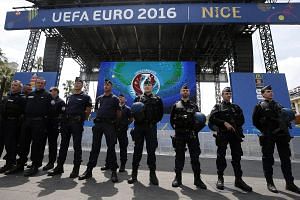 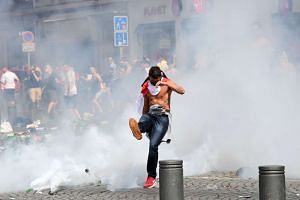 "Two hundred and fifty Russian fans repulsed an attack by several thousand English and forced them to flee," state news service Vesti reported. "English fans started the fight by attacking our fans, but 250 Russians from different corners of our country did not flinch and repulsed the attack of the heavily drunken islanders."

A Straits Times reader at the Stade Velodrome also suggested that the Three Lions faithful had started the trouble.

Vishaal Bhardwaj, a 38-year-old teacher, said: "The Russian fans were taunted by the English for large parts of the game and when they equalised the English fans above them hurled abuse and threw things at them. The Russians reacted...

"The English fans were totally disrespectful to the Russians and jeered during the Russian national anthem.

"Fights began immediately after final whistle and it was sadly not anticipated by the French security and stewards... Hell broke loose,"

A representative of the English Football Association read a statement at the post-match news conference, saying, "The FA is very disappointed by the terrible scenes of disorder and condemns such disorder."

The chaotic scenes were the latest chapter in a three-day story of mayhem and disorder surrounding the match, with sporadic violence flaring repeatedly between rival fans, locals and riot police.

The trouble, which initially centered on the Old Port area of the city, with police frequently firing tear gas to disperse groups, continued to the area surrounding the stadium in the hours before Saturday's 9pm local (Sunday, 3am, Singapore time) kickoff, with water canon and dogs used to again separate rival groups.

More than 1,000 police and a further 500 stewards are on duty at the stadium, with a further 1,000 overseeing events at the nearby fan zone, where around 80,000 people watched the match on giant screens, where initially at least, there was little trouble.