MARSEILLE, France (REUTERS) - Rarely can two 1-1 draws have stirred such conflicting emotions in a football team.

Just four days ago, Iceland's players were floating on air after holding Portugal on their major championship debut.

But on Saturday (June 18), those same men ended slumped on the turf in misery, having seen a landmark victory snatched from them by Hungary.

Iceland had been on course for a famous win after Gylfi Sigurdsson's 39th-minute penalty, only for Birkir Saevarsson to knock the ball into his own net two minutes from the end of the Group F clash.

"We were happy with a point against Portugal but really, really disappointed with a draw today. The dressing room was silent after the game."

Man of the match Kolbeinn Sigthorsson agreed: "It's quite a big loss for us, this draw.

"It absolutely feels like a lost game but we are still unbeaten so we can still be positive and go in the last match with full confidence."

Hallgrimsson said he was proud of the effort his players put in but said the relentless chasing eventually took its toll. 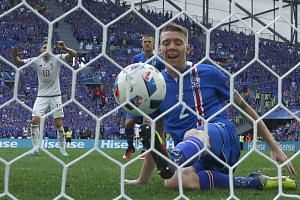 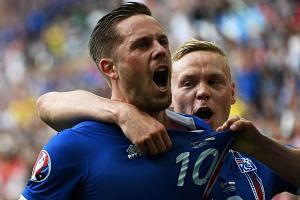 "They worked us hard, we didn't use the ball so well and it was probably a bit of tiredness, they kind of outran us in the end.

"But they also made some good changes from the bench, attacking changes, and sometimes when you take a risk it pays off.

"This is a very good Hungary team and other sides are going to have problems against them, that's for sure."

With two points in the bag going into their final game against Austria, who were playing Portugal later on Saturday, Iceland's fate remains in their own hands.

"We have to be upbeat, we are still in it of course but we were so close to almost qualifying," he said.

"Maybe tomorrow we will be happy with a point against Hungary.

"We are lucky we are in the last group so we can see if three points is enough or if we need to go for a win.

"It is good that we will know if we need to risk it. A win will put us through. A draw might, though I don't think it will be enough."