After leading from start to finish last season, Chelsea have earned the tag as the team to beat. They have effectively stood still over the summer but the challenge issued to their rivals is simple: Catch us if you can. Man City, Arsenal, Man United and Liverpool have all responded with key signings, but will it be enough? The Straits Times looks at the five title contenders, beginning with Chelsea today. Tomorrow: Liverpool

There were two words that pockmarked Louis van Gaal's monologues last season. The Manchester United manager may still not have defined his oft-mentioned, much-mocked philosophy but he struck more of a chord when he talked about the need for balance.

It is a common theme among the contenders. It is no coincidence the most balanced team last season, Chelsea, were crowned champions.

The task for everyone else is to acquire the elusive mix: Whether of young and old, British and foreign, attacking and defensive or physical and technical. 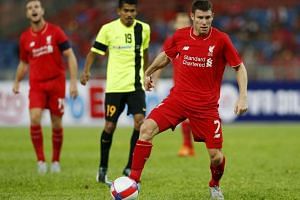 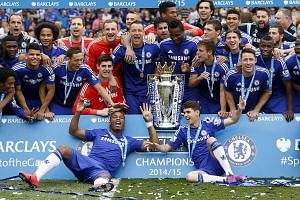 No big buys but Mourinho could get best out of Falcao

The balance he cites involves possessing two players for every position and a left-footed centre-back, hence the sight of Daley Blind in the middle of the back four in pre-season.

He has remodelled his squad by introducing Matteo Darmian, remedying the shortage of natural right-backs, plus Bastian Schweinsteiger and Morgan Schneiderlin. The German offers an alternative to Michael Carrick as a deep-lying playmaker. Memphis Depay brings pace to a side that did not possess enough, plus versatility.

Yet, whatever Van Gaal says, United's forward line looks curiously imbalanced after Robin van Persie's sale. Javier Hernandez, Adnan Januzaj and James Wilson may be given chances but Wayne Rooney is the only front-line striker to inspire confidence.

Liverpool have taken the opposite approach. They had too few reliable out-and-out forwards last season, when the strikers mustered a mere eight league goals.

Indeed, with Emre Can spending much of the campaign at the back, they did not select enough specialist defenders. Brendan Rodgers would pick teams with up to seven midfielders, some of them deployed out of position.

Now Liverpool should possess a more conventional look. Unlike Can, Nathaniel Clyne is a professional right-back. In Christian Benteke, Danny Ings and Divock Origi, they have three new strikers, all charged with rectifying the lack of goals.

James Milner's adaptability means he can always balance a midfield.

It is a reason Manchester City will miss him. They have had to rebalance their squad, with Raheem Sterling and Fabian Delph signed after they filled their foreign quota and Englishmen seemed an endangered species.

More significantly, Manuel Pellegrini seems to be switching from 4-4-2, which left his side outnumbered in midfield in season-defining games, to 4-2-3-1. His midfield signings are an indication of changing tactics.

Arsenal were long accused of naivety. They added steel by forming a solid midfield base of the fringe figure Francis Coquelin and a relocated Santi Cazorla.

Yet there is a fragility to their new-found balance: Arsene Wenger's decision not to buy an alternative defensive midfielder such as Schneiderlin leaves his side very reliant on Coquelin. An injury to the Frenchman could leave Arsenal's back four exposed.

At least they should be more frugal, with Petr Cech a superior last line of defence. There was an imbalance last season when Chelsea had two goalkeepers, in Cech and Thibaut Courtois, who were superior to anyone at Arsenal. Not any longer.

Jose Mourinho believes balance, like a team, is constructed by building from the back. Chelsea have a platform to play. Yet other sorts of balance can prove problematic.

A relentless focus on the Premier League may have cost them in Europe last season, and they need to ensure they finish the season as strongly as they start it.

Once English football's biggest spenders, they have become savvy sellers in recent years but may lack the Galactico-style attacking talent who could propel them into the ranks of the challengers to Real Madrid, Barcelona and Bayern Munich. It is the price they pay for balancing the books.