One is the former president of the Football Association of Singapore (FAS) and the other is chairman of two local football clubs. Both have now been interviewed by the Commercial Affairs Department (CAD) in the ongoing probe into alleged misuse of club funds and obstruction of club audits, and the links between Mr Zainudin Nordin and Mr Bill Ng do not stop there.

The former Bishan-Toa Payoh GRC MP is connected to the $500,000 donation that Mr Ng's Tiong Bahru Football Club made to the FAS in 2014.

The donation has hogged headlines ahead of the FAS election next Saturday.

FAS general secretary Winston Lee said it was Mr Zainudin who had asked for the donation, while Mr Ng disputed this even after the FAS released copies of documents to back the claim.

Concern over the donation was another reason cited by Sport Singapore for making its police report on Wednesday that led to CAD raids of Tiong Bahru, Hougang United, Woodlands Wellington and the FAS offices on Thursday.

The Straits Times found other links between the duo. In the minutes of Tiong Bahru's annual general meeting last June, Mr Ng endorsed Mr Zainudin as the next Tiong Bahru chairman.

In the meeting, Mr Ng said Tiong Bahru "needed new blood to take the club forward". He was in turn elected honorary adviser. Mr Zainudin's proposed appointment, to be made after he stepped down from the FAS, was put to a vote and accepted.

Asked about this on Wednesday, Mr Ng, founder of private equity firm Financial Frontiers, said: "We offered Zai but he didn't take it up." 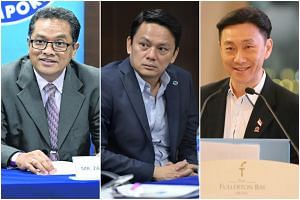 He added that Mr Zainudin changed his mind after receiving a job offer from the Institute of Technical Education (ITE). Mr Zainudin is now deputy principal (development) of ITE College East.

Other documents show links between the two that go beyond football.

A Google cache version of Financial Frontiers' website, dated March 23, listed private equity firm ESW Manage among the companies in its portfolio. A cache is a copy of a page stored by Google as a back-up.

Up to April 15, Mr Zainudin was listed as a director of ESW Manage, on a cached version of its website. His profile has since been dropped from the company's website. ESW Manage has also been removed from Financial Frontiers' portfolio.

ESW Manage is also a sponsor of Hougang United.

Another ESW Manage director is Mr Gary Tan, who is listed as the chairman of Woodlands.

Mr Zainudin did not respond to ST's queries about the Tiong Bahru chairmanship or his commercial ties with Mr Ng.

Mr Ng's spokesman Jose Raymond said yesterday: "It is premature at this point for Mr Bill Ng to comment on any matters pertaining to the queries by the Commercial Affairs Department, which began on April 20.

"As previously stated, Mr Ng will be fully cooperating with the relevant authorities throughout. We thank you for your understanding in this matter."

Associate Professor Lan Luh Luh, deputy chairman of the National University of Singapore's Centre for Law and Business, said there is legally nothing wrong with Mr Zainudin being asked to be chairman of Tiong Bahru, or for him to have business ties with Mr Ng.

But she added: "For good corporate governance, it might be good to disclose his business ties, to both Tiong Bahru FC and the FAS.

"If you have nothing to hide, just disclose."

ST understands that some members of the previous FAS council were unaware of the commercial ties between the duo.

Of the four people interviewed by the CAD so far, the only one with no direct connection to football is Ms Bonnie Wong. She is believed to be Mr Ng's wife.

She is also the majority shareholder of Polygon Ventures which, according to documents checked by ST, is the landlord of Tiong Bahru's clubhouse in the basement of People's Park Centre.

The clubhouse became the focus of attention after ST first reported this week that its 29 jackpot machines collected close to $37 million last year, more than the FAS budget of $35 million for the same period.