The Norwegian also believes victory at Old Trafford can be a crucial step towards making his side one "worthy of club history".

"We have to perform better than we did against PSG (2-0 Champions League loss earlier this month), because it's a big game, a big team, suddenly we're not underdogs any more, people praise us and now is the time to play Liverpool," he said.

"We need to learn from PSG, we got to make sure we stay focused, all these games are decided on little margins."

Solskjaer has won 11 of his 13 games in charge, losing just once to PSG in the first leg of the last-16 tie.

Three of the victories have been away at top-six sides Tottenham, Arsenal and Chelsea.

He would be welcome to have his talk to the players if he wanted to. Because we know how much it meant for him to overtake Liverpool.

The United caretaker boss pointed to these and stated that if United can defeat Jurgen Klopp's side, who are second in the league, it will represent progress in his aim to elevate the side.

"We want to build this team to be worthy of Manchester United history and it's another step (defeating Liverpool)," he said.

"Tottenham, Arsenal, Chelsea away - it was fantastic to win those three games.

"We want to be in the top four (at the close of the season) and we're playing Liverpool.

"We know how big this game is for Manchester United, and we've taken a few steps in the right direction in that process of becoming a team that challenges higher up the league."

Solskjaer identified midfielder Paul Pogba and striker Marcus Rashford as players the side can be built around while mentioning other important components.

"They're young enough to stay here for many years, but you've got (Nemanja) Matic and (Ander) Herrera that makes Paul's job what it is - you need to complement each other," he said. 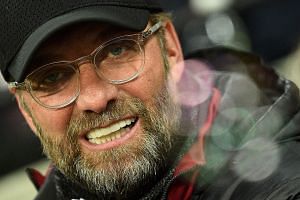 He also joked about inviting Alex Ferguson to deliver the team talk before the big match tomorrow.

The legendary United manager has acted as Solskjaer's mentor since the Norwegian took the reins in December.

"He would be welcome to have his talk to the players if he wanted to," said Solskjaer. "Because we know how much it meant for him to overtake Liverpool."

United have been boosted by news that French forward Anthony Martial and England attacking midfielder Jesse Lingard are making good recoveries from minor injuries - groin and hamstring respectively - and could feature in the match.

A version of this article appeared in the print edition of The Straits Times on February 23, 2019, with the headline 'Devils 'not underdogs''. Subscribe
Topics:
More
Whatsapp Linkedin FB Messenger Telegram Reddit WeChat Pinterest Print Copy permalink