After the struggles of David Moyes and Louis van Gaal following Alex Ferguson's retirement in 2013, the Premier League club turned to the Portuguese in a bid to bring success back to Old Trafford.

United won the Europa League and League Cup in his first season but the FA Cup is the only silverware realistically achievable this year after Tuesday's surprise last-16 exit to Sevilla.

Mourinho has been criticised by pundits and fans for his approach over both legs, prompting the United boss to go on a surprise, wide-ranging and lengthy 12-minute rant ahead of Saturday's FA Cup quarter-final against Brighton.

The Portuguese used detailed notes to draw comparisons between his efforts and United's performances in recent seasons, offering his critics a reality check about the club's current status.

"I say to the fans that they have the right to their opinions and reactions but there is something that I used to call football heritage," said Mourinho, whose dramatic performance recalled Rafael Benitez's famous "facts" press conference while Liverpool boss.

"And what a manager inherits is something like the last time Manchester United won the Champions League - which didn't happen a lot of times - was in 2008."

Mourinho pointed out that in seven seasons under four different managers, United's best performance in the Champions League has been a quarter-final appearance and the club's highest finish in the Premier League since Ferguson retired was fourth.

Mourinho's orchestrated response was a clear critique of the state of the squad and club he inherited when he took over just under two seasons ago, although his critics will point to the fact he has spent nearly £300 million (S$550 million) on new players and only four of his eight major signings started against Sevilla in midweek. 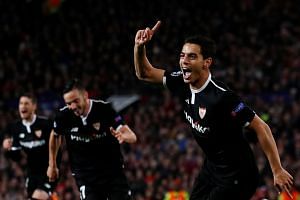 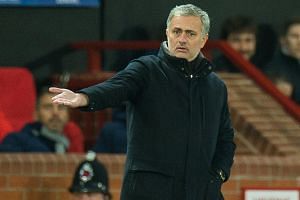 "In the last seven years, the worst position of Manchester City in the Premier League was fourth," he said.

"In the last seven years, Manchester City was champions twice and you can say three times. They were second twice. That's heritage.

"Do you know what is also heritage? It is that (Nicolas) Otamendi, Kevin De Bruyne, Fernandinho, (David) Silva, (Raheem) Sterling, (Sergio) Aguero, they are investments from the past, not from the last two years.

"That's football heritage and one day when I leave, the next Manchester United manager will find here (Romelu) Lukaku, (Nemanja) Matic, of course (David) De Gea from many years ago."

The depth of reaction to United's defeat, and particularly the manner of their exit, even provoked suggestions that Mourinho may not be around to see out his contract.

But Mourinho said the club's owners and executive vice-chairman Ed Woodward, remain firmly behind him.

"I have an amazing job to do," he said. "I could be in another country with the league in the pocket. I am here and I am going to be here and no way am I going to change my mentality."

"I understand that for many, many, many years it was really, really hard for the people who don't like me, here he is again, here he wins again," added the United boss.

"For 10 months I win nothing, the last title that I won was 10 months ago. I beat Liverpool, Chelsea, I lose against Sevilla and now this is their moment to be happy.

"I learn that in my religious formation - be happy with others' happiness, even if they are your enemies. I am a really lucky guy and happy to be where I am."