LONDON • Former Roma goalkeeper Alisson knows exactly what it is like to play at the Stadio San Paolo in Naples, Italy.

The Brazilian, signed by Liverpool for €75 million (S$119 million) in the summer, has warned his new club that it will be a tough task to take on Napoli in the Champions League today.

In March, he was part of a Roma side who beat the hosts 4-2 in the Serie A, but victory did not come easy.

"They had 24 attempts on goal, 13 on target. I made 11 saves and conceded two goals," Alisson told Liverpoolfc.com.

"It's always tough playing away against a great club. In Napoli, we'll definitely find really passionate fans, and a team that comes on the pitch with a huge desire to win.

"The last and only time I played there, we happily got a win, but it was one of the games I had to work hardest in."

Liverpool opened their Champions League campaign with a 3-2 win over France's Paris Saint-Germain, and Alisson feels that the victory has given the Reds confidence ahead of today's Group C clash. 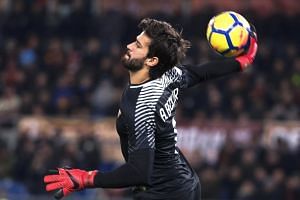 Five out of five for Liverpool

"To beat a great team like PSG fills you with confidence, but it'll be a different game so we have to look at it differently as well, bringing our desire onto the pitch, doing everything that we've been doing up until now," the 26-year-old added.

"On the pitch, we play as a team. Playing as a team not as individuals, that's our main quality. Our strength isn't in one player."

One player who has been impressive so far is resurgent striker Daniel Sturridge. Following his 89th-minute equaliser as a substitute against Chelsea, the Englishman is now the team's joint top scorer with four goals, despite Mohamed Salah, Roberto Firmino and Sadio Mane being ahead of him in the pecking order.

Sturridge, who has been plagued by injuries during his Anfield career, also played his part in Europe with the opening goal during the PSG win two weeks ago.

Manager Jurgen Klopp has outlined the 29-year-old's next step to maintain his sharpness for the duration of a whole match.

"He played fantastically against PSG. High intensity for 60 or 70 minutes and probably could have played longer (before he was substituted by Firmino)," said the German. "It must always be the target of a player to play with the highest intensity over 95 minutes.

"I don't know (if he can do it) because we haven't tried it yet. He 100 per cent understands the need to do that."