BARCELONA • As Lionel Messi lay on the Wembley grass, his left hand grasping the Champions League trophy and his right pumping the air, he must have thought there would be many more glory nights in Europe to come.

It was 2011 and Barcelona had beaten Manchester United 3-1 in the final. The Argentinian had scored his side's second goal and the club's name was carved into the trophy for a fourth time.

For the 23-year-old, it was a third triumph in six years. But there has been only one in the seven seasons since, with Luis Enrique leading them to a brilliant treble in 2015.

Now 31, Messi returns to Wembley to face Tottenham, with happy memories that have turned into his burden. He knows Barcelona have suffered three straight quarter-final exits. Last season, they collapsed at Roma when the Italians overturned a 4-1 deficit.

To make it worse, eternal rivals Real Madrid have marked that period with three consecutive European crowns since 2016.

A team effort is what he feels is the blueprint to success but, more often than not, coach Ernesto Valverde has been criticised for his team's reliance on his talisman - especially after failing to win in three consecutive league games. 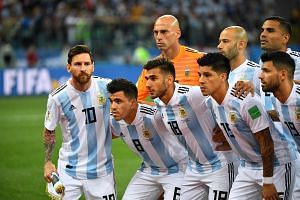 Argentina, Messi a reminder football is a team game

They drew 2-2 at home with Girona and lost 2-1 at bottom club Leganes, with Messi scoring once and making another in the two games. Then the Argentinian came off the bench on Saturday against visitors Athletic Bilbao to set up the equaliser in a 1-1 draw.

"This is Barca. We have enough players to not depend on one," the club captain said after the game, acknowledging the situation.

The LaLiga leaders' defence, the platform of their domestic success last season, is shaky, with fingers pointed at Gerard Pique, whose mistakes have become too frequent.

The midfield, without Andres Iniesta, lacks thrust while new signings Arturo Vidal, Clement Lenglet and Malcom are still bedding in.

Valverde will need a win today against Tottenham to boost his team's confidence following their run of poor form in Spain.

In Europe at least, they got off to a perfect start against PSV Eindhoven two weeks ago, winning 4-0 thanks to Messi's hat-trick.

But it is high time Valverde's men work as a team for both domestic and European glory.