Prolific scorer for school, Putri is also the youngest to play, and score, for Singapore

Along a corridor near the main office at Queensway Secondary School hangs a photograph of Putri Nur Syaliza. It leads to the school field, the arena of choice for the 15-year-old footballer.

"I'm shy lah," she said, turning her gaze to the ground. "The school puts up pictures of students who have got good achievements... My friends were all shocked when they saw it, and they teased me for having my face on that wall."

To say that Putri has good achievements would be a massive understatement. She scored 19 goals in five games in the Schools National girls' B Division championship - including the third in the 5-2 win over Hong Kah in April's final - to finish as champion and top scorer.

She had a sensational year in the C Division, where she plundered 42 goals in just six games to become the top scorer of the competition and lead her school to the title.

She was also named the Football Association of Singapore (FAS) Young Player of the Year after her debut season with champions Warriors FC in the five-team FAS Women's Premier League last year.

She has got a few more feathers in her cap, feathers that will likely ensure her photo stays on that school wall for some time to come.

Every one of us in the family is involved in football, even my mother who is managing an amateur club called Putra FC. And she's very supportive, taking me to training and matches too.

Even before she lined up in the B Division final for Queensway, Putri was called up to the national women's team, trained twice and, 12 days before her 15th birthday, made her international debut.

That March 5 match against the Maldives saw her make history on two counts for either gender.

She became the youngest Singapore football international, as a 33rd-minute substitute, and the youngest scorer with the opener in the 2-0 win.

The secret to her excellence is simple. "I really, really love football, and I just want to play. I started playing when I was four, with my brother," she said.

In a football-mad family of seven, Putri, the youngest and only daughter, had a lot of help. One brother is Singapore Under-23 international Syahrul Sazali, who plies his trade with the Young Lions in the Singapore Premier League.

"I remember following him to play football in our neighbourhood in Choa Chu Kang, and playing 'monkey' with our neighbours," she said. "I was always in the middle, having to try and win the ball, but even now my defending is really bad," she quipped, before breaking out in laughter. 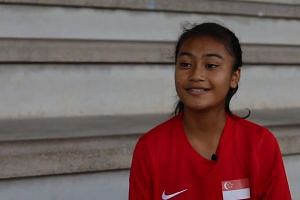 "Every one of us in the family is involved in football, even my mother who is managing an amateur club called Putra FC," said Putri. "And she's very supportive, taking me to training and matches too."

The support provided by Queensway is another key reason Putri has been able to focus on football. While her school team train thrice a week, she attends only one of those sessions. Instead, she trains three times with the national team, and twice with Warriors FC.

She said: "I really appreciate my school because I have friends who struggle to balance school football with national team (commitments). This way it's not tiring for me, so when I can, I go for both national team and school sessions."

Queensway's commitment to her sporting pursuits has gone even further. She was with the Under-16 team in Indonesia for May's AFF U-16 Girls' Championship and the school let her miss the mid-year exams.

"I'm really happy the school has been so supportive," she said.

Putri hopes to don national colours for next year's SEA Games, and has an eye on playing abroad, professionally but, for now, the aim is to improve.

"I just want to play football," she said. "And get better at defending - I'm really bad at it."

A version of this article appeared in the print edition of The Straits Times on December 22, 2018, with the headline 'A queen in the making'. Subscribe
Topics:
More
Whatsapp Linkedin FB Messenger Telegram Reddit WeChat Pinterest Print Purchase Article Copy permalink