Singapore is sending 13 athletes to the Sept 7-18 Rio Paralympics. The Straits Times takes a look at several of these representatives - how they manage to rise above their disabilities, how they train to compete with fellow Paralympians, as well as their hopes and aspirations

Fate dealt Syahidah Alim a tough card right from the start. Born with cerebral palsy 31 years ago, a life in a wheelchair beckoned.

But this tough cookie learnt to defy her limitations and defeat the odds. She has constantly endured painful and tiring physiotherapy sessions to strengthen her legs, so that she can move on her own steam instead of relying on devices.

I always tell myself that I'm there for a purpose, that's what motivates me to take that giant leap. I'm shooting competitively now, and I know with my investment and hard work, I will go far.

Today, she walks on her own without the need for a wheelchair. She has an unsteady gait but she is proud that she can walk for half an hour without taking a breather.

She had her victory over her disability, yet wanted to do more to prove that she can function like any other person.

And she found exactly what she wanted to do when she picked up archery at the age of 18 after visiting a disability expo.

Over the years, finding that she can aim her compound bow, which has an 18kg draw strength, let the arrows loose and find the target again and again boosted her self-esteem and confidence.

Then, a year ago, she decided that she wanted to compete.

"I enjoy shooting and the people I shoot with, and it grew on me. Archery was the best fit for me," the Sport Singapore corporate strategy executive told The Straits Times. 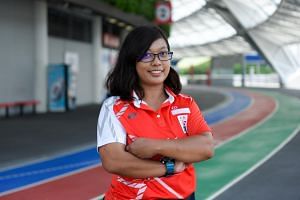 "But it took me a while to get used to competitive shooting. It's totally different from shooting leisurely. Shooting in competition, there's more focus and more of a structured process to follow through, and also expectations to meet."

While the transition from being a recreational sportsman to a competitive one took some adjustment, Syahidah soared again once she had zeroed in on her bow.

At last December's Asean Para Games on home soil, she was a double gold medallist in the individual compound and mixed team events. Next week, she will make her Paralympic debut as Singapore's first-ever para-archer at the Games - an honour she wears proudly.

In Rio de Janeiro, she will compete in the women's individual compound open, where she will shoot from a range of 50m.

At the Telok Blangah Archery Club where she trains, Syahidah sits on a stool to shoot, as standing for the duration of a competition is too exacting on her legs. She steadies her 5kg bow and holds her focus just like any able-bodied archer.

She also does not mind the quizzical looks from the casual archers at Telok Blangah.

"They would wonder what's going on and some even ask me what's the difference between the way I shoot and the way they do," she said with a laugh.

But the biggest obstacle in her way is not a physical one. As she explained: "Archery is an expensive sport and a setback I had was having to deal with that reality.

"It took me a while to grab hold of that reality. I told myself, 'Hey, I need to start taking archery seriously.' I had to invest in better equipment to perform better.

"I always tell myself that I'm there for a purpose. That's what motivates me to take that giant leap. I'm shooting competitively now, and I know with my investment and hard work, I will go far."

She dug into her savings to pay for her $4,000 compound bow. She usually trains twice a week for two hours each. But her training regimen intensified ahead of the Paralympics as she clocked in six hours a day at the range six times a week and went through about 200 arrows at each session.

She also hits the gym whenever she can to strengthen her core muscles, and swims regularly.

Fuelling Syahidah's dream are the people around her - family, friends, colleagues and the national archery team she has been training with since 2014.

She said: "Without them, it'd be a very difficult experience for me. Knowing that Singapore is behind me wherever I go motivates me to do better in archery.

"My parents especially, they've been very supportive in what I do - from the day I started archery to making that big leap to go competitive. Even for the Para Games, they watched me throughout and they give me power to do well."

Syahidah insists the high level of competition in Rio will not faze her.

"It'll just be me and the target board," she said. "I want to push hard and push strong to advance as far as I can in the Games. Most importantly, I want to just have fun and enjoy the process."

WATCH THE VIDEO ONLINE: Syahidah Alim on how she picked up archery: str.sg/4cCh

A version of this article appeared in the print edition of The Straits Times on September 02, 2016, with the headline 'Finding the purpose in her life'. Subscribe
Topics:
More
Whatsapp Linkedin FB Messenger Telegram Reddit WeChat Pinterest Print Purchase Article Copy permalink