Taking stock of what has been a whirlwind season, it was perhaps apt that Feng Tianwei chose the Seletar Aerospace Park to reflect on what she has been through after she was forced to fly solo.

In the year since she was unexpectedly axed from the national set-up by the Singapore Table Tennis Association (STTA), everything around the world No. 8 has flown by at the speed of a supersonic jet.

"The past year feels like it's passed by so quickly," she told The Straits Times late last month.

"It's probably the fastest that it's felt in the 10 years that I've been in Singapore."

Without the backing of the association, she was suddenly responsible for all aspects of her career for the first time. But the 31-year-old never considered giving up. To her, this was simply the latest act in a career she has spent in perpetual motion, altering and adapting to numerous changes.

"There was so much that I had to do for myself in the past year," she said. Among the things she took charge of was sourcing sparring partners with different playing styles as and when the need arose.

You're constantly vying with younger and better players, while trying to find a way to evolve. It's as if your opponent is speeding away in a car while you're chugging along on a bicycle.

FENG TIANWEI, on the difficult task of keeping younger players at bay.

"But I've been very happy through it all. I've felt very positive, like I'm on a path seeking improvement."

It was this pursuit of betterment that led her to become the anchor of a world champion team and Singapore's most bemedalled Olympian with three medals.

For someone whose career began in wintry Harbin where she was born, journeyed through Japan, before it finally took root and flourished in Singapore, it is fitting that her achievements have come from never remaining stagnant.

She said: "Table tennis is evolving constantly. New players come up all the time and each generation is superior to the one before it.

"They start on a clean slate but the older ones like us have to get rid of what we knew before and adapt to the new. You're constantly vying with younger and better players, while trying to find a way to evolve.

"It's as if your opponent is speeding away in a car while you're chugging along on a bicycle."

I strongly believe that I can achieve even more, that greater things are in store. I feel I could have new breakthroughs - at the Asian Games, Commonwealth Games, and even the 2020 Olympics.

In a sport that has undergone numerous changes over the past two decades, evolution is key - not just to stay relevant but to continually contend at the peak.

In 2000, the diameter of the ball was increased from 38mm to 40mm in a bid to lengthen rallies and improve viewership. A year later, the scoring system changed. But another ball change in 2014, in particular, confounded Feng.

Celluloid balls were replaced by plastic ones in a further attempt to slow the game down. It meant aggression became even more important. But going on the offensive constantly can also lead to more errors.

Said the former world No. 2: "My playing style is fiercer than before, but it's still not enough. Everyone plays aggressive now. If you don't, you're dead."

She believes each rule change could eliminate a generation of players. Many of her contemporaries have exited the scene, with China's Guo Yan, 35; Guo Yue, 29, and Li Xiaoxia, 29, among the notable ones. All are either Olympic medallists or former world champions.

"Looking back, I'm glad that I'm still able to stand here after all the changes, and haven't been ousted," said Feng. "I think it's about retaining what is good from the past. You can't just abandon it all too, because I also have my unique style. It's about how you use your experience, your style and add something to it."

Yet, fine-tuning the intricate details of one's game at this level is tough - more so when alone. Feng, who does not have a coach, admits the learning curve has been steep.

She said: "Most players have an entire team behind them to study and tackle a change, to help them adapt to it. The more people you have behind you, the better the effect.

"But I'm doing it myself. I have to make adjustments myself. I probably have to take a few detours, take the long way, go through trial and error before I arrive at what turns out to be the right solution.

"To be honest, it's really hard, but I do find it meaningful."

She has reaped further satisfaction from her results.

She made headlines last December when she beat then-world No. 1 and reigning Olympic champion Ding Ning at the China Table Tennis Super League, then won her 10th International Table Tennis Federation (ITTF) singles title at the Korea Open in April. She also partnered Yu Mengyu to the women's doubles bronze at the World Championships in May, before becoming the best-performing paddler at August's Kuala Lumpur SEA Games, with three golds in as many events.

Each competition is an opportunity to make a statement, even if it is not targeted at those who wrote her off following her split with the STTA.

She said: "Why did I work so hard to win three medals? I think it's a form of glory, a responsibility. It's reflective of where your standard lies.

"I'm very unwilling for others to say Singapore, a country that had world champions and were world No. 2, can't even win at the South-east Asian level. That's something I can't accept."

While she admits that staying at the top has become harder as she approaches the twilight of her career, she soldiers on because she is certain she is capable of more.

She said: "I strongly believe that I can achieve even more, that greater things are in store. I feel I could have new breakthroughs - at the Asian Games, Commonwealth Games, and even the 2020 Olympics. 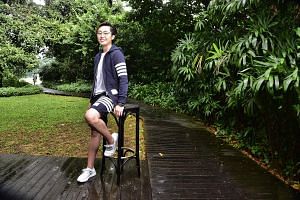 Lunch With Sumiko: Triple Olympic medallist Feng Tianwei comes out of her shell

"That's why I didn't choose to call it a day, why I feel I must give it my all, until the day I feel I've arrived at the end point, that 'this is it' and if I continue, the path leads downwards. Then, maybe I will stop."

Her next journey will take her to Magdeburg, where she will compete against the world's best at this week's German Open on the ITTF World Tour.

Planes are known to take off into a headwind. Feng has proven she can fly with the wind. Now, she is learning to rise against it.