On a Friday evening, in a violent world, a gentle act. As hissing fighters throw punches at shadows in the Red dressing room, a mother lovingly braids a daughter's hair. This is a pre-fight ritual between Jewelz Lee and Angela Lee but it is about more than looking pretty, it is practical. "I don't want her hair to go in her face," says Jewelz. One unsighted second is all it takes to lose.

At 5.03pm, Angela, aiming to win the atomweight world title at the One Championship, arrives at the Indoor Stadium in a bus which is heavy with fighters, low with body fat and resplendent with tattoos. She is slim, sinewy and with a smile that's always within easy reach. By 11.30pm her face will be swollen, her bruises surfacing and it may hurt her just to smile. In fighting you can see the price of victory.

"Sick fight," someone will approvingly say. "Rocked it," insists another voice. "You made history of the world, dude," a third person tells her. In a corridor of congratulatory people, she waits for her turn outside the Medical Room. 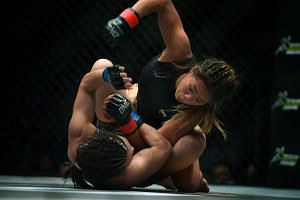 But at 6pm, in a dressing room where an entire banana plantation is being eaten, she knows nothing of all this. She lies down, shirt on face. She reads a brochure. She's the last to fight but is not exactly sure when she will fight. Depends on how long the others last. Depends on the guy who warms himself up by beating his calves, his chest, his thighs and then goes out and gets beaten.

At 19 she's learning the great art of sport. Waiting. Waiting for a chance to be allowed into the cage to test the wire for bounce and feel the arena. Waiting for her hands, seemingly too tiny to be lethal instruments, to be wiped with rubbing alcohol, then wrapped with gauze and tape. Waiting for her father to squeeze, bend, twist new gloves so that they can be loosened.

Waiting just to be somebody.

At 7.40pm, she slowly starts to get busy, shuffling, weaving, sparring with dad, Ken, and grappling with a male fighter her size. The fights are finishing, the room is emptying. Her brother, Christian, who has won his bout, presses her shoulders. At 10.22pm a Singapore flag is affixed to her and her smile evaporates.

Cornermen can plead forever but grit is a virtue only the fighter can summon. Days ago I asked Angela if she scares boys and she laughed and said that some of them think, naah, she can't be a fighter, she's too nice. They should see her now: 52.1 unyielding kilograms.

Down a long corridor she walks without a word. Later she says she was surprised by how "emotional" she was. Later Ken says, "I told her I was proud of her, I told her it was her time." Black curtains part and the crowd hails her entrance into the spotlight. The tension is as thick as the vaseline smeared on her face.

Angela hugs her father, then her brother, as her mother strokes her arm. The cage, its door locked from outside, is a lonely place. Mei Yamaguchi, from Japan, who is already pacing inside, knows that. This crowd isn't here for her but she will shake them in the third round when she knocks Angela to the ground. Like every athlete, Yamaguchi wants to be the story. But Angela won't let her.

I am just outside the cage, feet from the wire, and it hardly matters if you don't understand arm bars, sweeps, triangle chokes, because everyone can recognise heart. It's what carries both fighters through five rounds, of five minutes each, of rugged, remorseless conflict.

Cornermen can plead forever but grit is a virtue only the fighter can summon. Days ago I asked Angela if she scares boys and she laughed and said that some of them think, naah, she can't be a fighter, she's too nice. They should see her now: 52.1 unyielding kilograms. All that training that began with stretching when she was three years old is about to pay off. She wins and confetti rains down on her tearful face.

The crowd disperses and compliments collect. Colin Schooling, Joseph's father, texts me to say, "This girl has tenacity and she really inspired me". In the corridor, as Angela waits, Yamaguchi exits the Medical Room and these two fighters clinch again. This time it is only a hug. They pose for photos and then Yamaguchi leaves with a joke about a new weight division for herself. She is 152cms of dignified defeat.

Midnight is closing in and the Lee's gather. They're like a shield for each other, a very pleasant, very likeable family, who are knit by love and combat. It's been a long day for them and yet a triumphant one. As they turn to leave, one thing is clear: Angela Lee's once beautifully braided hair is now a mess.

A version of this article appeared in the print edition of The Sunday Times on May 08, 2016, with the headline 'Family ties strengthen the heart of the fighter'. Subscribe
Topics:
More
Whatsapp Linkedin FB Messenger Telegram Reddit WeChat Pinterest Print Purchase Article Copy permalink