The downtown city area will be bustling this weekend with four major events taking place at the same time: the Standard Chartered Singapore Marathon (SCSM), U2 Joshua Tree Tour, C3 Anime Festival Asia (AFA) and Christmas Wonderland at Gardens by the Bay.

This rare convergence of schedules is expected to see hundreds of thousands throng the area. As a result, organisers have advised eventgoers of the potential congestion.

Previous editions of the SCSM, first held in 1982 as the Singapore Marathon, usually saw the event begin before dawn. But this year's 42.195km marathon, half-marathon and Ekiden relay races will flag off at 6.05pm at the F1 Pit Building tomorrow. The shift is to fulfil criteria in the organisers' bid to get the SCSM listed among the Abbott World Marathon Majors, a series of the world's most prestigious marathons.

Major road closures will begin from 1pm on race day, starting at the Marina Centre zone. Normal traffic activity will resume by noon on Sunday, after the 5km and 10km races.

"We've worked closely with stakeholders and the authorities to ensure the spectator zones, and start and finish lines are easily accessible by public transport," said Mr Geoff Meyer, managing director of Asia for Ironman Group, which manages the SCSM. He added that besides the participants, over 100,000 supporters are expected at the event.

When Ironman announced road closures earlier this month, it advised those who wish to drive to and around the downtown area to rely on apps such as Google Maps or Waze for navigation.

Marathon participant Gwen Lim, 38, said she intends to drive to the event but added: "I'm a little bit apprehensive because I might have trouble finding parking (spaces).

"I've checked the apps and where to park, but I don't know how tired I will be walking back to where I parked after a full marathon.

"But everyone I know who's participating is excited to see how this night race turns out."

About 50,000 are expected to take part across all race categories. 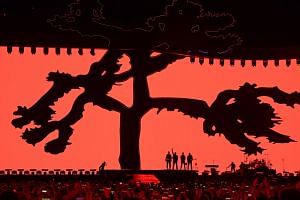 The Life List: Why U2's The Joshua Tree is one of rock's most important albums

Roughly the same crowd size is expected tomorrow and Sunday night at the National Stadium for the U2 Joshua Tree Tour. The concerts will mark the 30th anniversary of the Irish band's 1987 mega-selling album of the same name.

The Singapore Sports Hub is advising concertgoers to use public transport and arrive at least two hours before the U2 show.

Meanwhile, the sixth edition of Christmas Wonderland at Gardens by the Bay opens today. In 2015, the month-long event drew 1.2 million people.