The Olympics are regarded as the pinnacle of an athlete's career. What is to be learnt at the Games? Five recent Singapore Olympians tell The Sunday Times of their key takeaways.

These Olympic Games were supposed to be where Jasmine Ser made the breakthrough she had been training for. Instead, Rio became the site of the biggest setback of her shooting career.

She had expected to leave Brazil with at least a place in the eight-woman final, if not a spot on the podium. Instead, she returned to Singapore with a painful lesson in embracing defeat.

"I realise I need to have an even more positive attitude," said the 25-year-old, who has not picked up her rifle since returning from Rio about a fortnight ago. "Because if you don't believe, then you'll stay in this state.

"I should find out what the things I should work on more are to make the changes for my next campaign.

"How can I embrace this challenge of coming back after I've fallen down, what do I have to do to come back and be stronger?"

Ser had hoped that in exchange for devoting the past two years to full-time training, she would at least find herself among the top eight at the Olympics, especially in her pet event, the 50m rifle three positions. 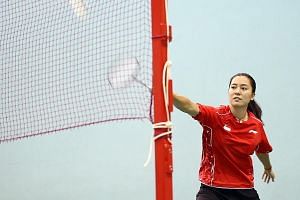 Wearing the nation's colours is for professionals

Committed to using the Olympics as a vital lesson

Making a run for Singapore athletics

She finished 34th out of 37 shooters.

"But your biggest setback is also where you learn your biggest lesson. If it's not so painful, then I would've just let it go and gone for a holiday.

"But I've spent a lot of time thinking about areas I should work on and where I should improve."

Ser has been spending her time working out in the gym, reading and mulling over a more advanced course in German.

She does not know when she will return to the range to train again in preparation for a run at the Tokyo 2020 Olympics, but she is well aware that when she does, changes - difficult ones - will have to be made.

The shooter said: "I probably will make things more difficult for myself in training so that I can improve further. Change my training method, exercise more.

"I realise there are no shortcuts."