GWANGJU (South Korea) • Caeleb Dressel failed to equal his joint-record haul of seven gold medals, which he achieved at the last world championships in Budapest, alongside Michael Phelps, but he can lay claim to sole ownership to the single-meet record.

At a tournament that has seen him set two world records and touch home first in the 50m and 100m freestyle, 50m and 100m butterfly, 4x100m mixed and men's free relays, and land the silver medal in the 4x100m mixed medley relay, he had been targeting a final flourish in the pool in his last and only event yesterday - the 4x100m men's medley, which the United States had not lost since 1998.

Dressel had done his part after dragging the US team from fourth to first with the fastest-ever fly split (49.28), and while he was denied the perfect ending after a week of utter dominance, he still ended the evening as the first swimmer to claim eight medals at a single world championships.

Joking that he was "probably losing some hair", such was the pressure on the 22-year-old's shoulders as Phelps' heir apparent, the newly crowned Fina Male Swimmer of the Meet, told ESPN: "Part of me is very happy.

"Part of me wants to cry that I'm done with it. I've got pimples on my face from just the stress of the meet.

"It was a very tough week. I knew I was going to have to come with fire, passion and pride in every single race. I don't think there will ever be an instance where I get two silvers and six golds and be upset." 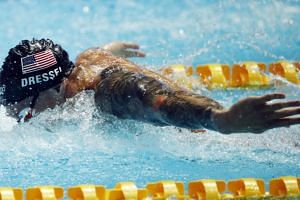 The Americans had more to cheer as Lily King added the 50m breaststroke title to the 100m gold she had already won, getting to wall in a time of 29.84, ahead of 14-year-old Italian Benedetta Pilato, who promptly burst into tears, with Russia's Yuliya Efimova third.

The reigning Olympic gold medallist said: "We got to the wall and she was crying immediately. I didn't know if it was happy or sad tears, she's 14.

The third of the water-churning one-lap dashes saw Simone Manuel complete the 50m and 100m free double to become the first American woman to do so.

She came home first (24.05) in the former, ahead of Sweden's Sarah Sjostrom and Australian Cate Campbell.

Later, Manuel and King joined forces, alongside Regan Smith and Kelsi Dahlia to set a world record of 3:50.40 in the 4x100m women's medley relay final ahead of Australia in second and third-placed Canada, ensuring the team ended "the meet on a good note".

There were also other outstanding individual performances on the night - Germany's Florian Wellbrock became the first athlete to win titles in two different sports at a single world championships after he added the 1,500m free crown to his 10km open water gold.

Daiya Seto brought some cheer to next year's Olympic hosts Japan by winning the men's 400m individual medley for a third time, while Hungary's Katinka Hosszu became the first woman to win five world titles in the same event.

It was not all sunshine and smiles on the final day, however, with local police revealing they had banned Tamas Kenderesi from leaving the country as they investigate allegations of sexual harassment against the Hungarian, the 200m fly bronze winner at the Rio Games.