CARDIFF, United Kingdom (AFP) - Geraint Thomas soaked up the cheers of his home town as the Tour de France champion was welcomed by thousands of fans on his return to Cardiff on Thursday (Aug 9).

Team Sky rider Thomas is only the third Briton to win the legendary Tour and his presence in Cardiff sparked a rapturous reception from the Welsh public.

Around 8,000 people lined the streets of Cardiff to salute the 32-year-old, who took to a stage to be congratulated by First Minister Carwyn Jones.

"Thanks for coming, I was a bit worried it was just going to be the wife and the dog," Thomas joked as his wife Sara and dog Blanche watched in the crowd.

"I'm used to racing in front of thousands of people but to walk out to this, this is bonkers." Asked what he planned to do to follow his Tour triumph, Thomas joined in the party mood: "A few more beers!," he said with a smile.

"I thought the race would be harder, I felt pretty good. The race was a dream and couldn't have gone better."

Thomas, whose Team Sky contract is about to expire, had been courted by rival teams after winning last month's Tour. 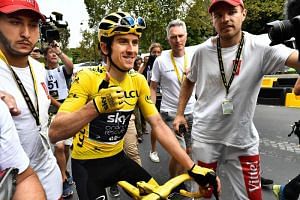 But he is on the verge of signing an extended Team Sky deal and said: "I've made my mind up (about staying) in my head really and just need to get it done officially.

"It's nice to have some good offers, but hopefully it will be done in the coming days."

First Minister Jones saluted Thomas's unexpected success, telling the crowd it was a huge boost to Wales' reputation to have a Tour champion for the first time.

"In politics you spend a lot of time selling Wales to the world and Geraint has done more in 21 days than I could've done in 21 years," he said.

"From the whole of the country, thanks for what you've done."

Thomas then got on his bike to ride through Cardiff, with hundreds of fans dressed in yellow jerseys, replicating the shirt given to the Tour leader after each stage.

Thomas, who lives in Cardiff, urged the crowd to use his victory as inspiration to "follow their dreams".

"Do what you love to do. Anything is possible with hard work. You're always going to have hard moments but if you really want to do something, go for it," he said.