The swimmer signed copies of two books published by Straits Times Press for the first 50 buyers in the queue.

A line had started to form about 20 minutes before the books went on sale at noon and soon swelled to about 150 inside the News Centre auditorium to welcome Schooling and listen to the 21-year-old speak.

Addressing the crowd, he said: "I went to Anglo-Chinese School (Junior) and I can remember from a long time ago that some of my classmates, they didn't have enough money to eat food during recess at the canteen. 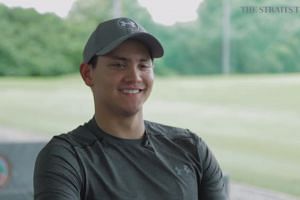 The sale of these limited edition copies raised $28,000 for the STSPMF, which provides financial assistance to children from poor homes.

Schooling Joseph is one of two books published by Straits Times Press about the swimmer. The second, titled From Kid to King, is a children's book written by ST news editor Marc Lim and illustrated by freelance artist Darel Seow.

Both books are authorised biographies.

Schooling then read excerpts from From Kid to King to about 20 children from the SPMF.

Twenty per cent of proceeds from the Nov 21 sale of both books will also go to the STSPMF.

Said Singapore Press Holdings' editor-in-chief of English, Malay and Tamil Media Group Warren Fernandez: "Joseph has shown us the power of having big dreams, just as he dreamt one day he would be like his hero Michael Phelps on the rostrum and actually made it happen. Many people can have big dreams but he showed the grit and determination and perseverance to make that dream come true.

"But most of all, even after he had his dream come true and won the gold medal, he remains humble and remembered people who have helped him and gave to him and remembered the need to give back to others as well."