GOLD COAST, AUSTRALIA (AFP) - Australia smashed world records in swimming and cycling on day one of the Commonwealth Games, as the hosts rebounded quickly from hurdler Sally Pearson's shock pullout on Thursday (April 5).

The 31-year-old poster girl's withdrawal with an Achilles problem made for a gloomy start to competition but it gave way to a triumphant evening for the hosts.

Australia's three gold medals at the Anna Meares Velodrome included a world record in the men's 4,000m team pursuit as they stamped their authority on the cycling competition.

It was only a slightly less fruitful night for the Aussies in the pool, where they won two golds including a new world mark in the 4x100m women's freestyle relay. 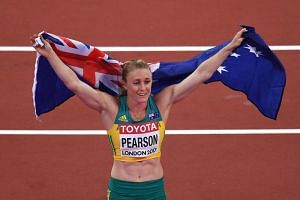 Pearson, the 100m hurdles world champion and a Gold Coast resident, earlier said she was in tears when she realised she had to withdraw, but added: "My health comes first."

The former Olympic champion is the face of the Games but she said a longstanding Achilles' problem flared up two days ago and left her unable to clear hurdles in training.

"Of course, I did everything I possibly could. I left no stone unturned to get out here and race for Australia in the 100m hurdles and the 4x100m relay," Pearson said.

"Everyone knows how much of a competitor I am and how much I love running for my country and my team-mates.

"I know I have a lot of fans who were wanting to watch me race. But for me, it is about my health and I want to go to Tokyo (Olympics) in 2020."

In the men's race, Olympic gold and silver medallists Alistair and Jonny Brownlee of England trailed home 10th and seventh, as the 2016 bronze winner Henri Schoeman accelerated away for gold.

"I would have preferred it to be a full-distance race on a super-hard course," Alistair said, lamenting the decision to race over sprint distance, or half an Olympic course.

Muhammad Azroy Hazalwa won the first of two gold medals for Malaysia in weightlifting, a result he celebrated by dancing and doing a lap of honour of the lifting area.

"I was devastated after not winning a medal at the Rio 2016 Olympics, and since then I have made it my life's mission to become the best in my sport," she said.

"I am my biggest opponent. I strive to always beat my best records to ensure that I keep progressing forward."

Wales had a day to remember when Anna Hursey, the Games' youngest competitor at just 11, won a doubles table tennis match in the women's team event against India, together with partner Charlotte Carey.

But there was also controversy in the pool when defending champion Ben Proud of England was disqualified from the men's 50m butterfly heats for a false start.