LAS VEGAS (AFP) - Gennady Golovkin retained his three world middleweight boxing titles on Saturday, fighting to a draw with Mexican star Canelo Alvarez in a showdown for middleweight supremacy that lived up to the hype.

The 35-year-old Golovkin, making his Las Vegas debut, kept hold of the World Boxing Council, World Boxing Association and International Boxing Federation belts in front of a crowd of 22,358 at the T-Mobile Arena.

Byrd's lopsided score did not reflect the explosive drama of a bout in which Golovkin moved forward aggressively while Alvarez was the counter-puncher with fast hands.

Golovkin won most of the early rounds but then got hammered a few times with Alvarez's upper cuts and right hands and seemed to be the more tired of the two near the end.

Golovkin established himself early in the fight with his stinging jab, all the while effectively cutting off the ring. There was no feeling-out process in this one as both fighters came to fight from the opening bell and tried to land big punches early. 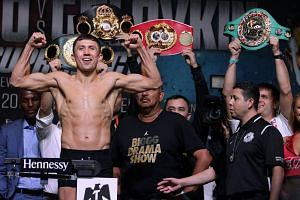 Boxing: Gennady Golovkin has fighting in his blood

Golovkin said he expected Alvarez's game plan to include a few surprises and the former two-time champion Alvarez did not disappoint.

In the fourth round, Alvarez tried to press the attack, but he paid for it as Golovkin got the better of those exchanges.

The 27-year-old Alvarez's best round was the 10th, when he stunned Golovkin with a vicious right hand to the head. Alvarez tried to finish him off but Golovkin survived and once he shook off the cobwebs the two continued their brawl on the ropes and in the centre of the ring.

By the time it reached the 12th round, both boxers looked exhausted. Alvarez charged out of his corner looking for the knockout and Golovkin finished the round with a wild flurry of lefts and rights.

The fight was two years in the making, and left many wondering why it did not happen sooner.

Boxing fans will be hoping the contest is the launching point of an extended rivalry like those of Manny Pacquiao and Juan Manuel Marquez, Erik Morales and Marco Antonio Barrera and Micky Ward and Arturo Gatti.