Visitors to the Temasek Club's bowling alley yesterday morning were treated to the peculiar sight of the nation's best bowlers seemingly frozen in action.

No, Professor Charles Xavier from the X-Men movies did not drop by for a quick demonstration of his powers.

Instead it was the bowlers' attempt at the mannequin challenge, the latest viral sensation where people freeze themselves in place as one person films the entire set-up.

The idea was mooted by kegler Shayna Ng, who said she wanted to get in on the action after watching many such videos online. She said: "It seemed like everyone is doing it. Our kayakers and divers also did it and I thought it'd be cool if the bowlers could come up with one."

Their 47-second video required two takes after 15 minutes of planning. "We wanted to hold the ball in mid-air but it was too heavy. This is a scene right out of a regular training session, with people taking videos on the lanes and the coach observing from behind," said Ng. 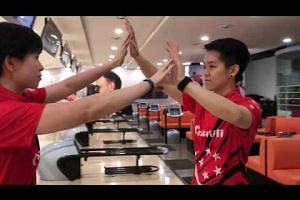 Mannequin Challenge, the new viral video sensation, set to cause a standstill in Singapore

Team-mate Cherie Tan mused: "If only we could make the ball move at the end when everyone started moving. That would be perfect."

Other athletes to take up the mannequin challenge include NBA basketball team the Cleveland Cavaliers, whose 31-second clip filmed during their visit to the White House featured United States First Lady Michelle Obama posing for a wefie with LeBron James.

The Portugal national football team also filmed a 61-second video in their dressing room, with Cristiano Ronaldo - who else - taking centre stage.

The Real Madrid forward stood in the middle of the room in his briefs, flaunting his sculpted physique while striking his trademark goal celebration pose.

Among the more impressive mannequin challenges include one by the Brigham Young University gymnastics team. Their 37-second video included several members suspended mid-routine on the uneven bars and balance beam.

The videos are usually set to the song Black Beatles by Rae Sremmurd.