Pin Xiu overcomes pre-race nerves to rule the pool, finishing more than 10sec ahead of field

She and her team had been raring to hit the pool at the Rio Olympic Aquatics Stadium for days, eager to get rid of the "itch" to race.

Yet, just hours before her first Rio Paralympic race on Friday, Yip Pin Xiu was racked with doubt, just like any top athlete. It does not matter if she was to swim in the 100m backstroke (S2), a race which she is the fastest in the world bar none.

How fast would her body react to the starting pistol? Would her muscular dystrophy, which causes her muscles to gradually lose their ability to function, claim her ambition, as it had her body?

As she told The Sunday Times: "I was actually very nervous the whole day.

"We (athletes) have doubts sometimes, we don't know if today is a good day for our bodies."

She need not have worried. Her arms were burning as she paddled furiously during the race, but so was her iron will, one that had seen her defy bullies who had thrown staples at her when she was young because she looked different.

And it carried her to not only a Paralympic gold, but also two world records.

In stopping the clock at 2min 7.09sec and shaving more than two seconds off her own previous world record time of 2:09.79, she also broke the 50m backstroke world mark with her split of 59.38sec.

The gold is Singapore's first medal won at the Rio Games, which started on Thursday.

I was actually very nervous the whole day. We (athletes) have doubts sometimes, we don't know if today is a good day for our bodies.

YIP PIN XIU, on feeling nervous before her Paralympic race.

It also ensured that the Majulah Singapura national anthem was played at the same venue for the second time this year, almost a month after fellow swimmer Joseph Schooling had claimed the nation's first-ever Olympic gold medal in the 100m butterfly.

I was dying during the race, trying my hardest to pull (with my hands)... It was really just a lot of mental strength to go at my fastest-ever speed.

YIP PIN XIU, on how she swam her world-record race. 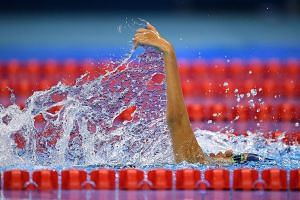 Then, she will be bidding to become the first Singaporean to win two golds at a single Paralympics when she competes in the 50m back (S2), an event in which she will be the hot favourite again, after her world-record setting feat.

Still, she said: "I don't want to think about it and pressure myself medal-wise, but I'm more confident about my fitness level right now."

The Singaporean had set the previous 100m back mark at the International Paralympic Committee Swimming European Open Championships in Funchal, Portugal, in May.

After she touched the wall of the pool and surfaced for air, Yip - who by her own admission has "terrible" eyesight because of myopia as well as a left eye whose optic nerves have been damaged by muscular dystrophy - noticed the pockets of Singaporeans in the spectator stands jumping.

The final-year Singapore Management University social sciences undergraduate added: "I was dying during the race, trying my hardest to pull (with my hands).

"I couldn't really see who was beside me.

"It was really just a lot of mental strength to go at my fastest-ever speed and to compete against myself and my previous times."

Her coach Mick Massey agreed that they were under pressure to win as she was the world record holder going into the final.

The Briton, who wheeled Yip into the mixed zone after her race, said: "We said we want to be on the podium. The truth is, we wanted to win the gold."

Massey, who fondly calls his charge PX, said it took "a lifetime" for her to achieve this result and admitted that they had been raring to go days before the race.

"For the last few days, all we wanted to do was race," he said.

"You get up, you just want to do it because you don't want to think about it anymore. It's crazy."

Yip started swimming when she was five, but began racing in 2004. Back then, she was racing in the S3 class, and in her debut Paralympic Games in Beijing in 2008, she snared a gold (50m backstroke S3) and a silver (50m freestyle S3).

In Rio, she is now competing in the S2 class. In disability sport, for physical impairments, the classification ranges from 1 to 10. The lower the number, the more severe the impairment.

Chef de mission Ho Cheng Kwee said he was "incredibly proud" of Yip and is "confident that this will be the start of a few more medals".

She said: "We hope that the people with special needs in Singapore can see that it is not about their disabilities.

"It is about them pushing themselves, discovering their abilities and talents and then to be passionate about it and work hard towards it, which is what Pin Xiu did."

Dr Chiang Hock Woon, deputy chief executive officer of Sport Singapore, added: "She has just shown us what the human spirit is capable of in times of great adversity.

"We're all very proud of her."