True, the Los Angeles Lakers star did set some records of his own in a staggering 60-point finale to his 20-year career on Wednesday.

But the definitive record-breaking act of the day came in another part of California - Oakland, where the Golden State Warriors wrapped up six months of sustained excellence in an easy win over the Memphis Grizzlies. 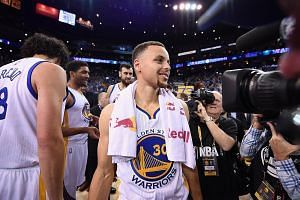 There was no drama there, but it still seemed like a symbolic passing-of-the-torch moment from one retiring superstar who endured criticism of selfishness to the current dominant team, who are widely praised for their selflessness.

And while the Warriors also have star power in Stephen Curry, they are unlike any other team that had ruled the NBA roost before.

More than any other team in NBA history, they have used the three-point shot as a key part of their offence, led by not one but two exceptionally dead-eye shooters.

The Warriors' unprecedented regular-season success must be followed up with a second straight NBA title in June, in order for all doubts to be banished about whether or not they are one of the all-time greatest NBA teams.

Before them, the three-point shot was always viewed as a low-percentage shot, attempted primarily by specialist role players. The best NBA sharpshooters attempt about 500 three-pointers all season, making about 200 of them.

Curry has obliterated that mark - making 402 three-pointers from 886 attempts (about 45 per cent), some of them from outrageous distances. The next player on this all-time list, ironically his sidekick Klay Thompson, has 276, also in this campaign.

So far, the duo have befuddled all the league's defences, all of whom are unsure whether to spread wide to smother them (leaving their basket wide open for other Warriors to exploit) or to let them shoot, praying the shot rattles out (good luck).

While their rivals agonise over this dilemma, the Warriors have gleefully run away with the best all-time regular-season record, their 73-9 win-loss mark trumping the 72-10 Chicago Bulls in 1995-96.

And gleeful is the exact word to describe them.

Search online for a YouTube fan video called "Celebrating Steph Curry's 3 Pointers Before They Happen". It shows four instances of Curry launching three-pointers and, in the two seconds it took for the ball to travel its rainbow arc into the net, his team-mates were already raising their hands in celebration, even giving him a high-five in one scenario.

Sure, there will be intense debate over whether they are better than the 1995-96 Bulls, who were led by the incomparable Michael Jordan.

Yet for all we can marvel at in that Bulls team's exceptional defensive prowess and Jordan's relentless excellence, their dominance felt oppressive. Jordan was well-known for being hard on under-performing team-mates, while coach Phil Jackson's trademark triangle offence is one of the most difficult strategies to execute and master.

The Warriors, on the other hand, are the embodiment of fun - resembling a rollicking bunch of weekend warriors whom anyone would be eager to join and play with.

Their style is simple but infectious and seemingly effortless: Run a lot, pass the ball around quickly and shoot a three-pointer if unguarded.

It helps that Curry is hardly a typical NBA superstar. While other stars like LeBron James are all about power and muscle, he is about accuracy and finesse.

And unselfishness too. On the rare occasions this season when his shooting skills went awol, his point-guard instincts took over as he found his team-mates who had no qualms about shouldering his scoring burden.

So the Warriors' dominance validated a five-year team building plan by owner Joe Lacob to lift them out of their moribund state in the previous two decades, when they made the play-offs just once in a 15-year stretch.

He endured boos when he traded away the previous franchise star Monta Ellis in 2012, but had the conviction to give the green light to develop an unconventional squad.

Yet, the Warriors' unprecedented regular-season success must be followed up with a second straight NBA title in June, in order for all doubts to be banished about whether or not they are one of the all-time greatest NBA teams.

The path is tricky, even though they have looked near-invincible all season. The San Antonio Spurs, who are not far behind with 66 regular-season wins, could give them an epic seven-game series in the Western Conference finals.

If the Warriors survive that, then James and the Cleveland Cavaliers will likely await them in the Finals. Should the Cavs stay injury-free unlike last year's play-offs, their star trio of James, Kyrie Irving and Kevin Love could be hard to handle.

But the joy of tracking the Warriors through the past six months has been in seeing them decisively overcome every obstacle - tough back-to-back games, Curry's niggling ailments and coach Steve Kerr's prolonged absence with back pain.

While there is a counter-argument that they lack a clear opponent to make their dominance even more riveting - in the mould of the duels between the Lakers and Boston Celtics in the 1980s - there is still a slight possibility that the Spurs or the Cavs will construct strong teams soon and create a fresh rivalry with the Warriors.

And as declining teams like Miami Heat or Oklahoma City Thunder start to rebuild, this might be the final season in which the Warriors' playing style is viewed as being unorthodox, as Lacob believes other teams will copy their two-sharpshooter approach pretty soon.

"They'll take chances and challenge the incumbent and... try to create the magic," he told the Wall Street Journal.

For now, they are closer to invincibility than any other team in history. And that means the road must finish with Curry hoisting the Larry O'Brien trophy in two months' time.

And in that moment, the Warriors' record-breaking feat will outshine Bryant's final act.

A version of this article appeared in the print edition of The Straits Times on April 15, 2016, with the headline 'Second title the key to the way history will judge Warriors'. Subscribe
Topics:
More
Whatsapp Linkedin FB Messenger Telegram Reddit WeChat Pinterest Print Purchase Article Copy permalink