(REUTERS) - Jayson Tatum scored 17 of his game-high 39 points from the fourth quarter on, leading the Boston Celtics past the visiting Los Angeles Clippers 141-133 in double overtime in the National Basketball Association on Thursday (Feb 13) night.

Marcus Smart added 31 points, and Gordon Hayward scored 21 with 13 rebounds as the Celtics enter the All-Star break winners of eight of their last nine.

Lou Williams had 35 points, Kawhi Leonard scored 28 with 11 rebounds and Montrezl Harrell had 24 points and 13 rebounds for the Clippers, who completed a 1-3 road trip. Los Angeles lost Paul George in the second quarter with a recurrence of a left hamstring strain.

In the night's other game, Danilo Gallinari scored 11 of his 29 points in the fourth quarter as the visiting Oklahoma City Thunder held off the New Orleans Pelicans 123-118.

The Thunder completed a four-game sweep of the season series in the last game for both teams before the All-Star break.

Dennis Schroder had seven of his 22 points in the fourth quarter, Shai Gilgeous-Alexander finished with 17 points, Chris Paul had 14 points and 12 assists, Steven Adams had 11 points and 11 rebounds and Mike Muscala scored 10.

Rookie Zion Williamson led the Pelicans with a season-high 32 points, surpassing the 31 he had two nights earlier against the Portland Trail Blazers. J.J. Redick scored 24, Lonzo Ball had 16 points and Jrue Holiday totalled 14 points and 11 assists. 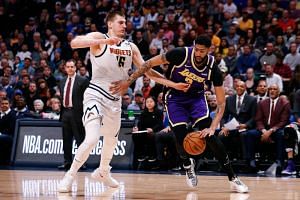 After Smart and Tatum gave the Celtics a four-point lead against the Clippers with 2:01 to go in the second overtime, Hayward drilled a trey with 1:36 left for a 137-132 edge.

Hayward added a block, a steal and four free throws the rest of the way as Boston cruised to victory.

Tatum put the Celtics up 127-124 in the first overtime before Landry Shamet tied the score on a trey with 21 seconds to go. Tatum missed a potential game-winner at the buzzer.

Williams scored 15 points in the fourth, leading the Clippers from down eight in the quarter to a 107-all tie with four minutes remaining. The Clippers knotted the score again at 114 on a Marcus Morris Sr. trey with 46.8 seconds left.

Kemba Walker missed a chance at a game-winner to lead to overtime.

Before Thursday, the Celtics and Clippers had went to overtime only once each this season - when they first met in Los Angeles on Nov 20, a 107-104 Clippers win.

The Celtics grabbed the game's only double-digit advantage, 72-62, on a Hayward 3-pointer with 8:51 left in the third.

The largest lead of the first half came on a 7-0 Clippers run to start the game, which the Celtics answered with 10 straight points from Smart. Neither team led by more than four points in the second as Boston carried a 60-58 edge into the break.