LOS ANGELES (AFP, REUTERS) - Pascal Siakam scored 37 points as the Toronto Raptors won their 16th NBA game in their last 17 with a 118-101 victory over the Phoenix Suns on Friday (Feb 21).

He scored 25 of his points in the first half and also had 12 rebounds as the champions also won their eighth straight game at home to stay second in the Eastern Conference with a 41-15 record.

Serge Ibaka delivered 16 points, Fred VanVleet chipped in with 14 points, seven rebounds and seven assists, and Terence Davis had 14 points off the bench in front of a crowd of 19,800 at the Scotiabank Arena.

Devin Booker scored 21 points and had eight assists and Deandre Ayton tallied 17 points and 10 rebounds for the Suns (22-34), who have lost seven of nine.

Ricky Rubio had 13 points and nine assists, and Kelly Oubre scored 11 points in the loss.

Meanwhile, Zion Williamson scored 25 points and the New Orleans Pelicans completed a four-game season sweep of Portland with a solid 128-115 road victory over the Trail Blazers.

Jrue Holiday recorded 20 points, nine assists and four steals and Brandon Ingram added 16 points and six assists for the Pelicans, who have won seven of their past 10 games. 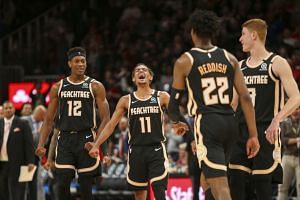 Elsewhere, the Indiana Pacers overcame a shaky finish and a slow start to hold and beat the New York Knicks for the eighth time in the past nine meetings with a 106-98 victory.

T.J. Warren scored 27 points to lead the Pacers, who outscored the Knicks 65-45 in the second and third quarters.

The Knicks held Indiana to just 12 points in the opening quarter but the Pacers recovered to shoot 53 per cent from the field in the second and third. Indiana managed to pull off the victory despite missing 15 of 20 shots in the fourth quarter.

Domantas Sabonis posted his 42nd double-double with 24 points and 13 rebounds and Doug McDermott came off the bench to score 14 points for the Pacers, who won their second consecutive game after losing six straight.

Victor Oladipo finished with eight points in little more than 25 minutes before exiting with back soreness.