LOS ANGELES (AFP) - Pascal Siakam scored 34 points as the Toronto Raptors shrugged off their injury problems to extend their winning streak to 15 games on Monday (Feb 10), with a 137-126 defeat of the Minnesota Timberwolves.

His dominant display included six three-pointers as the reigning National Basketball Association champions overpowered a resilient Timberwolves side to cement their grip on second place in the Eastern Conference.

Kyle Lowry added 27 points with 11 assists for Toronto, while O.G. Anunoby had a career-high 25 points while hauling in 12 rebounds.

Siakam's points tally included 14 in the fourth quarter, a decisive contribution that helped lock down the victory for Toronto who have 40 wins against 14 defeats.

Toronto's win was made all the more impressive as it came after the late withdrawal of Serge Ibaka, who fell ill hours before tip-off. The Raptors were already without injured starter Marc Gasol.

"I think these guys have proven enough that they can win," Raptors coach Nick Nurse said afterwards. "We've had a lot of injuries this year, but they just keep stepping up and playing and we've just gotten used to it.

"You at least have to go out and give a great effort, give yourself a chance to win, and don't let the other team play harder than you."

The Timberwolves were led by Karl-Anthony Towns with 23 points while D'Angelo Russell, who completed his move from the Golden State Warriors last week, added 22 points and forced a team-leading six turnovers.

Bucks and Lakers roll on

The Milwaukee Bucks, meanwhile, are a whopping 6.5 games ahead of Toronto at the top of the Eastern Conference after clinching their 46th win of the season.

The Bucks overcame the absence of reigning NBA MVP Giannis Antetokounmpo - who skipped the game after the birth of his son earlier on Monday - to rally past the Sacramento Kings 123-111.

With Antetokounmpo out, Khris Middleton and Eric Bledsoe shouldered the burden of the offensive duties with each player finishing with 28 points apiece.

Brook Lopez had 20 points while Wesley Matthews, Sterling Brown and Donte DiVincenzo all cracked double figures as Milwaukee improved to 46-7 with their fifth straight victory.

Milwaukee were made to work hard for the win, overturning a 90-88 deficit at the end of the third quarter to pull away in the final period.

Middleton was pleased with the way the Bucks dug out the victory in the absence of Antetokounmpo. 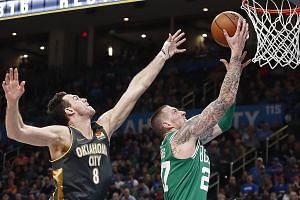 Basketball: Clippers bounce back with 41-point win over Cavaliers

"Teams may think they might be able to win when he's not out there. But that's what motivates us. To let them know we're a complete team."

In Los Angeles, Anthony Davis had 25 points and 10 rebounds, while LeBron James added 17 points as the Lakers breezed past the Phoenix Suns 125-100 to maintain their lead at the top of the Western Conference.

Rajon Rondo added 23 points from the bench on a night when six Lakers players finished with double-digit points tallies.

The Lakers improved to 40-12 for the season, three games ahead of the Denver Nuggets, who held on to second spot with a roller-coaster 127-120 win over the San Antonio Spurs.

San Antonio looked to be cruising towards victory after opening up a 23-point lead in the third quarter.

But a spirited Denver fightback, which included a double-double from Nikola Jokic, turned the game back in the Nuggets' favour, with the home side pulling away to complete the win.

In Dallas, Tim Hardaway Jr had 33 points and Kristaps Porzingis added 28 but it was not enough to stop the Mavericks sliding to a 123-119 loss to the Utah Jazz.

The Mavericks, missing the injured Luka Doncic, fell to 32-22 while Utah improved to 35-18 to remain in fourth spot in the Western Conference.