LOS ANGELES (AFP) - LeBron James received a rapturous reception in his home debut for the Los Angeles Lakers on Tuesday (Oct 2) but was unable to prevent his new team from slipping to a second National Basketball Association pre-season defeat by the Denver Nuggets.

James, who joined the Lakers in July from the Cleveland Cavaliers on a four-year deal, was given a rousing standing ovation by the Staples Centre crowd as he arrived on court.

The 33-year-old delighted the crowd with some silky touches during 15 first-half minutes.

He finished with 13 points, three assists, three rebounds, two steals and four turnovers during 15 minutes on court in the first half before sitting out all of the second half.

The game ended in a 113-111 win for Denver, who had also beaten the Lakers in San Diego on Sunday in James' first game with his new club.

Earlier on Tuesday, James told reporters he was still adjusting to his new environment, and once again cautioned that the new-look Lakers squad would take time to gel.

"We've got a new group. We're not at the level that a lot of the teams are in terms of cohesiveness and chemistry," James said following morning practice. 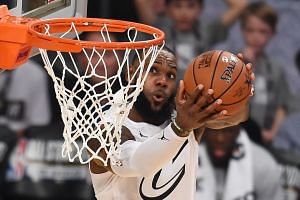 "Every day is another opportunity for us to get better."