CLEVELAND (Reuters) - A beaming LeBron James returned home to wild celebration on Monday when he stepped off the Cleveland Cavaliers' team plane carrying the long-coveted National Basketball Association title he promised to deliver for the city's long-suffering fans.

The mere sight of James set off loud cheers from adoring fans who showed up to thank the basketball superstar for leading Cleveland past the Golden State Warriors in a decisive seventh game of the NBA Finals on Sunday.

The players did not address the crowd but James appeared to take a shot at the Warriors as he disembarked the plane wearing a blue "Ultimate Warrior" T-Shirt while holding the glittering NBA championship trophy high above his head.

The Cavaliers plane was given a water salute that saw giant arches of spray shoot over the aircraft. The plane then pulled up along a chain-link fence where thousands of fans on the other side, eager for a glimpse of James and his team-mates, held up their mobile phones to capture a moment for which many had waited a lifetime. 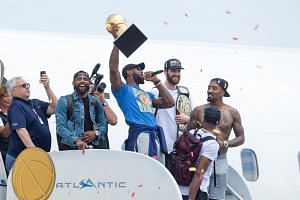 Miami stint separated agony from ecstasy when the heat was on 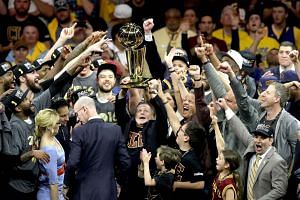 NBA: What you need to know about 2016 champions the Cleveland Cavaliers

When the door to the plane opened and players started filing out, British rock band Queen's iconic anthem "We Are The Champions" blared through the speakers.

Many of the Cavaliers, who made a stop in Las Vegas after winning the title in Oakland, California, hung out on top of the staircase so they could capture overhead video of the crowd before descending the steps to the tarmac.

The loudest cheer was reserved for James, who carried the Cavs all season and spearheaded the greatest Finals comeback in NBA history as Cleveland became the first team to rally from a 3-1 series deficit and win the title.

It marked the first NBA title for a long-struggling Cavs franchise and the city of Cleveland's first professional sports championship since the 1964 Cleveland Browns of the National Football League.

As James walked down the steps of the plane, the crowd showered him with shouts of "M-V-P, M-V-P" before breaking into a "Let's Go Cavs" chant. Traffic was so bad near the airport that many Cavs fans reportedly abandoned their cars in bumper-to-bumper traffic and walked to the hangar.

Fans will get another chance to salute their Cavaliers as the team will have their championship parade and rally in downtown Cleveland on Wednesday.