LOS ANGELES (AFP) - Anthony Davis had another big night against his former NBA team, scoring 46 points to lead the Los Angeles Lakers to a 123-113 victory over the New Orleans Pelicans on Friday (Dec 3).

But he said his second 40-point game against the Pelicans was not as emotional as his 41-point performance last November in New Orleans, where he began his National Basketball Association career as the overall top draft pick in 2012.

"It was just another game for me," said Davis, who also pulled down 13 rebounds. "The first game in New Orleans was definitely a lot more emotional, not only going against my former team but playing in that arena again.

"Tonight I think my teammates just gave me great opportunities and put me in great position to score the basketball."

While it felt like a regular day at the office for Davis, three players traded by Los Angeles to obtain him - Lonzo Ball, Brandon Ingram and Josh Hart - may have felt those emotions flowing when the Lakers played a highlight video featuring the trio.

Ball scored a team-high 23 points and Ingram added 22 for the Pelicans, who cut a 22-point deficit at the start of the fourth quarter to be seven behind with 2:25 remaining.

A three-pointer from Danny Green, a steal by LeBron James and a basket by Davis pushed the lead back to double-digits and the Lakers won their fourth straight since halting a four-game losing streak.

Green finished with 25 points and James chipped in 17 points and 15 assists - including a lob pass to Davis who threw down a dunk with 3:42 remaining.

"He just scored in every way that you can," Lakers coach Frank Vogel said.

James Harden came up big in Houston, scoring 44 points with 11 assists and 11 rebounds to notch his first triple-double of the season in the Rockets' 118-108 victory over the Philadelphia 76ers.

Clint Capela added a season-high 30 points with 14 rebounds and Russell Westbrook added 20 points as the Rockets handed the Sixers their fourth straight defeat - a disappointing skid in the wake of their Christmas upset of the Milwaukee Bucks.

The Rockets' 18-point third quarter lead had dwindled to single digits with 2:07 remaining when Harden drained a step-back three-pointer that boosted the Rockets' lead to 11. 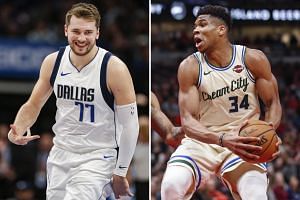 After another three-pointer, Harden connected with Capela for an alley-oop dunk that capped the scoring with 55.4 seconds left.

Harden made 13 of 24 shots. Capela connected on 12 of 16, outplaying Philadelphia star Joel Embiid, who finished with 20 points and 12 rebounds but made just seven of 17 from the floor.

In Boston, Daniel Theis blocked a three-point attempt by Atlanta's Trae Young with 2.7 seconds remaining and the Celtics escaped with a 109-106 victory over the lowly Hawks.

"I knew he wanted to take the three to win the game," centre Theis said. "He probably would've beat me for a lay-up, but I think he just wanted the game-winner... and at the end I was right there to block it."

Atlanta, who came into the game with the league's worst record, jumped to a 29-11 lead in the first quarter.

Boston, led by 24 points and 10 rebounds from Jaylen Brown, cut the advantage to two points by half-time, and led by two going into the final period.

Theis' big block finally defined the night, leaving Young - who finished with 28 points and 10 assists - disappointed in his return to action after two games sidelined by a sprained right ankle.

Terrence Ross was the star in Orlando, tying a season-high with six three-pointers in the Magic's 105-85 victory over the Miami Heat.

Ross finished with 25 points and teammate Nikola Vucevic posted his 15th double-double of the season with 20 points and 11 rebounds.

Jimmy Butler scored 23 points for Miami, but the Heat were throttled by the Magic in the fourth quarter when their six points matched the lowest total in a quarter by any team in more than two years.