It's no surprise that the Los Angeles Lakers snagged LeBron James. They were the overwhelming favourites to acquire him, and both parties have been eyeing each other for years.

James owns two homes in LA, and his post-basketball aspiration is to be one of the world's greatest entertainment moguls.

As the National Basketball Association's most glamorous franchise, the Lakers live superstar to superstar. This is a match made in hoop and hoopla heaven. Yet it's still stunning that James agreed to become a Laker so quickly, on the first day of free agency, and with so much uncertainty on Los Angeles' roster.

James isn't coming with Paul George, who is staying in Oklahoma City. He isn't coming after the Lakers finagled Kawhi Leonard from San Antonio. The Lakers agreed to re-sign underachieving Kentavious Caldwell-Pope and reached a deal with James' former antagonist, Lance Stephenson, but James is basically alone, babysitting Lonzo Ball, Brandon Ingram and the rest of the kids.

Of course, signing the best active basketball player on Earth gives the Lakers the freedom to go big and sacrifice any or all of their youngsters for Leonard or another All-Star who could help James make the franchise a championship contender once again. But there are no guarantees and, surprisingly, it seems that James is OK with that.

For all the debate about whether the effervescent Magic Johnson possessed the charm to pull off this coup, James may have wanted the Lakers just as much as the Lakers wanted him. And, just like that, the Lakers have risen from a five-year competitive coma.

In their first 65 seasons, this franchise - which shares the title of most essential with the Boston Celtics - missed the playoffs just five times. But, for the past five seasons, the Lakers have been sitting at home during the post-season. They haven't finished with a record better than last season's 35-47 mark. Their winning percentage over the past half decade is .307 - which equates to a record of 126-284.

Since Kobe Bryant retired two years ago, the Los Angeles Lakers have existed without an All-Star and true face of the franchise. They have been so bad that LaVar Ball, the father of the Lakers' great point-guard hope, is a more compelling (and irritating) figure than his son and the rest of the players on the roster. It all changes now that King James is here.

The Lakers are relevant again and, even if they can't land an experienced running mate for him, James is so great that he can take the current raw cast and make it a play-off team. But are the Lakers back? Well, let's not go that far just yet.

Since Kobe Bryant retired two years ago, the Los Angeles Lakers have existed without an All-Star and true face of the franchise. It all changes now that King James is here.

Johnson, the legend turned president of basketball operations, was howling about the Lakers being back from the minute he took over the franchise in February last year.

When the team drafted Lonzo last summer, he introduced him breathlessly as the "new face of the Lakers". He's the king of charisma and hyperbole. But Johnson's boldest move to date - the kind of splashy acquisition that owner Jeanie Buss hired him to make - probably will result in understated celebration. Why? Because the Lakers have too much work to do. And James is playing his latest departure from Cleveland in a much more subdued manner. 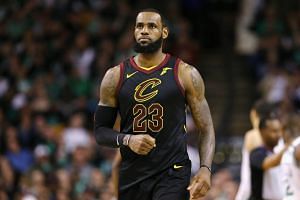 8 things to know about LeBron James 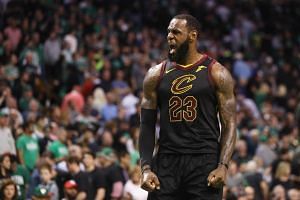 Klutch Sports Group, which manages him, announced the decision on Sunday with a one-sentence, stick-to-the-facts press release. There are currently no plans for James to attend a news conference or explain himself in a video, not even on his "Uninterrupted" platform, according to ESPN.

James is arguably the most famous active American athlete, and he is joining one of the world's most popular sports brands, and there will be no fireworks show.

This is likely James' way of showing Cleveland how much he has learnt since 2010, when he left for Miami and announced it with the "The Decision" special on ESPN.

He gave the Cavaliers everything he had during his second stint in Cleveland, carrying them to four Finals appearances and winning a championship in 2016. This goodbye will be full of disappointment, but it doesn't figure to enrage north-east Ohio this time.

Now, he's off to chase another dream. His legacy as a top-five player in NBA history is secure. But there will be pressure in LA, more than he would have felt at any other destination.

To have the best Hollywood ending, he must beat the Golden State Warriors and kiss another Larry O'Brien Trophy, if not two.

A version of this article appeared in the print edition of The Straits Times on July 03, 2018, with the headline 'Even with James, LA still have a lot to do'. Subscribe
Topics:
More
Whatsapp Linkedin FB Messenger Telegram Reddit WeChat Pinterest Print Purchase Article Copy permalink