SINGAPORE - One of the cruellest things in sport is to be so close to ultimate victory, and then have it ripped from you. In the last minute.

That was exactly what the Singapore Slingers experienced on Wednesday (May 15) as they lost 84-81 to CLS Knights Indonesia in the Asean Basketball League (ABL) Finals title decider despite leading for more than 36 minutes of the 40-minute affair.

The heartbreaking loss means the Slingers have now lost three Finals in four years and their hunt for that elusive first ABL title continues into the 10th season next term.

Slingers coach Neo Beng Siang, was as desolate as his team who were in tears. He said: "I blame myself for not being able to take the team over the line.

"We had a 10-point lead with nine minutes to go, it was money in the pocket, and we gave them the chance to come back. We are really disappointed because we led for most of the game, but gave up an open three at the crucial moment.

"But at the end of the day, I'm proud of everyone's contribution from the players to the fans."

The Slingers had led at the end of each of the first three quarters. 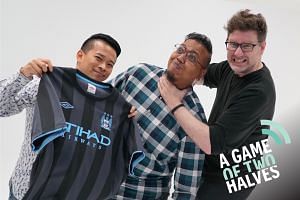 Local power forward Delvin Goh was exemplary with 19 points and 11 rebounds in the first three periods, Larry Liew was keeping a lid on Knights dangerman Doug Herring Jr. and Xavier Alexander was in triple-double mood (he would finish with 23 points, 12 rebounds, 10 assists) for the Slingers.

With Herring Jr. and Maxie Esho, who had just two points in the first half, reaching four fouls for the Knights early in the final quarter, the Slingers looked like they had one hand on the trophy as they led 70-60 early in the fourth quarter.

But the visitors kept fighting and ironically, it was former Slingers guard Wong Wei Long who nailed the go-ahead three-pointer to put the Knights 82-79 up with just 53 seconds left.

Knights coach Brian Rowsom said: "We just played good zone defence in the last five minutes, made the Slingers shoot from the outside because we felt they were penetrating quite easily, and on the offensive end, we also made big shots.

"At the start of the season, we just wanted to make the playoffs, and now we have won the title. This win is for the whole of Indonesia."

Wong added: "I wasn't playing so well, but we ran through the set-play our coach wanted and when Doug passed the ball to me, I knew I could do it, and I did it. I was super excited because when I made it, I knew we would win.

"I'm really emotional because my parents, wife, brother and sister-in-law are all here to support me, and my family has been flying in and out of Singapore to support me during my seven months with the Knights.

"I feel sorry for my old team Slingers because they are a very good defensive team, very aggressive, and they worked so hard to get to three finals in four seasons, which shows how consistent they are. It was really neck-and-neck, and sometimes you need a bit of luck to win the championship."

While the Knights and Wong will celebrate a first ABL title, the Slingers will have to dust the disappointment off, try to keep the majority of the squad, who have resonated with Singaporeans, together, and return for another title tilt next season.

"But it's been a hell of a Finals series. I tip my hat to the opponents, and to my team-mates for sticking it out, and I'm thankful to all the fans whom we really appreciate.

"Will I be back? Never say never, because I love this place, and it feels like family. But for now, we need to take some time off to take our minds off basketball."

Goh added: "We are bitterly disappointed because for many of us, it's the third time in the Finals and we just couldn't close it out.

"We wanted it so bad and for most parts we did pretty well. We just have to be strong and bounce back. This is a great squad and if we stay together, I believe there's a title in this team."