OKLAHOMA (AP) - The Oklahoma City Thunder seems to thrive on fourth-quarter pressure, as evidenced by their latest comeback on Tuesday night (Dec 31).

Danilo Gallinari and Dennis Schroder each scored 20 points, Chris Paul hit the go-ahead basket with 40 seconds left and the Thunder rallied from a seven-point deficit in the final three minutes to beat the Dallas Mavericks 106-101.

Paul scored 13 of his 17 points in the fourth quarter and added eight rebounds and seven assists for the Thunder, who have won seven of their last eight games to move into seventh place in the National Basketball Association's (NBA) Western Conference.

"The really good teams in our league, the last four or five minutes, they really lock down and tighten up," Paul said.

"That's what we did. We've got to figure out how to put the whole game together, but I'm happy with what we've been doing."

Luka Doncic led the Mavericks with 35 points, 10 rebounds and seven assists, but he and Maxi Kleber each missed a potential tying three-point attempt in the final seconds.

"We got two pretty good looks, I would say," Doncic said. "We think that in any game, but the ball just didn't go in, so I hope the next time it goes in."

Dallas played without usual starters Kristaps Porzingis and Tim Hardaway Jr, who missed the game due to injuries.

"We're not going to be an excuse team," Dallas coach Rick Carlisle said. "We're not going to go there. We've just got to execute a little bit better at both ends. It's a one-possession game up until the last part of the game, so one more make and one more miss one way or the other and the thing's different. 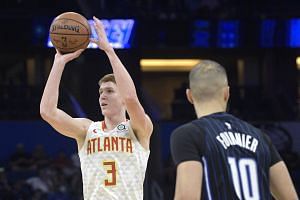 "But that's the NBA now. There's a very thin margin for error and you've got to be really good at both ends."

Dallas led by as many as 12 points in the first half thanks to 23 points by Doncic, who was listed as questionable to play after he suffered a left wrist sprain and back contusion after taking a hard fall on Sunday against the Los Angeles Lakers.

But the Thunder closed to within 51-50 by half-time and twice led by six points in the third quarter before Dallas took a 78-77 lead into the fourth quarter.

Gallinari - who missed the Thunder's previous four games due to a sore left ankle - poked the basketball away from Doncic at the other end, leading to two free throws by Schroder with 19.9sec left.

"I was just trying to play defence off the scouting report," Gallinari said. "He likes to go left rather than right, so I knew he was going to get back to his left hand. It was a good play."

After Kleber and Doncic both missed their three-point attempts, Shai Gilgeous-Alexander sealed the win with two free throws with 2.9sec left.