LOS ANGELES (AFP) - LeBron James finished with 35 points and 16 rebounds while battling a virus as the Los Angeles Lakers won their seventh straight game with a 129-114 win over the Dallas Mavericks on Friday (Jan 10).

The flu-weakened James was a questionable start against Dallas, but the Lakers couldn't afford to be without him as they were already missing their leading scorer Anthony Davis because of an injury.

"I was just trying to be aggressive and trying to set the tone for the offence and defence," said James, who moved into fourth place ahead of Michael Jordan on the National Basketball Association all-time field goal list.

"It was a big loss not having Anthony Davis which meant we all have to pick up our individual games."

Davis, who leads the team in scoring with a 27.1 average, took a hard fall against the New York Knicks and suffered a bruised behind.

Both clubs were without key players on Friday. The Mavericks have played their past six games without 2.21m forward Kristaps Porzingis (right knee soreness), who is second on the team in scoring with a 17.3 average.

Mavericks coach Rick Carlisle complained earlier this week that teams were "beating the crap" out of Doncic this season and he took exception to some of the calls on Friday night.

He was knocked in the head a couple of times in the Mavs previous three games with the Lakers this season.

At one point Carlisle got into a verbal exchange with James after Carlisle complained to the officials that James was getting off easy compared to his young star.

Carlisle, who was also upset at his players for their poor defence, got thrown out of the game early in the fourth quarter for arguing with the officials.

Kyle Kuzman, who started in place of Davis, finished with 26 points.

In Los Angeles, Kawhi Leonard scored 21 of his 36 points in the second half, leading the Clippers to a come-from-behind victory over visiting Golden State.

The Clippers overcame a 10-point, fourth-quarter deficit despite playing without All-Star Paul George, who sat out after aggravating a left hamstring strain in practice earlier this week. 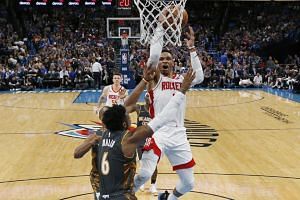 George, who initially sustained the injury against the Detroit Pistons on Jan 2, is also expected to miss the Clippers' road game against the Denver Nuggets on Sunday.

Leonard, who converted 14 of 25 shots from the floor, also had nine rebounds, five assists and three steals. Lou Williams scored 21 points for the Clippers.

Elsewhere, Jordan Clarkson scored 20 points as the Utah Jazz extended their league leading winning streak to eight games with a 102-92 win over the Charlotte Hornets.

The Jazz started fast and never let up, winning their sixth consecutive home game and improving to 26-12 on the season in front of a crowd of 18,300 at Vivint Smart Arena.

Rudy Gobert added 15 points with 13 rebounds, Bojan Bogdanovic scored 16 points and Georges Niang added 15 for the Jazz, who now head out on a three-game road trip through Washington, Brooklyn and New Orleans.

Terry Rozier scored 23 points and Miles Bridges added 11 as the Hornets lost their third consecutive game and lost for the ninth time in their last 11 games.

The Pelicans pulled away in the second half to win their eighth game in the last 11 and improve to 14-25 on the season.

New Orleans has been one of the hottest teams in the NBA since they snapped a franchise record 13-game losing streak in mid-December.

The Knicks have lost five straight - their second losing streak of at least five games this season.

Ingram also had nine assists and six rebounds in the win. He has scored at least 25 points in seven of his past 11 games.

Jaxson Hayes posted a double-double with 18 points and 10 rebounds for the Pelicans. He shot a superb seven of eight from the field with his only miss coming on his last shot of the game.