Japanese badminton star Kento Momota must work on his attitude if he is to ever realise his potential on court - at least in the eyes of national head coach Park Joo Bong.

The South Korean broke his silence on the recent incident involving his star player gambling at an illegal casino back in Japan, saying that he, too, was shocked.

"We were at the Malaysia Open and he suddenly returned to Japan," he told The Straits Times on the sidelines of the OUE Singapore Open which concluded on Sunday. 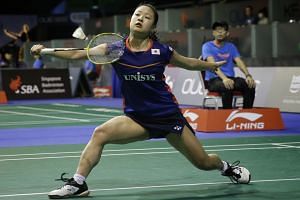 "I'll go back to Japan and we will have a meeting on this matter. It's a serious thing in Japan."

Momota, who rose to a career-high world No. 2 early this month but has since slipped to No. 3, had admitted to his actions.

If you only have skills and good badminton, I don't think you can be a champion. Discipline - if it's not enough, then you cannot be world champion.

PARK JOO BONG, on what Kento Momota must do to realise his potential.

It led to an indefinite ban from competition for the 21-year-old, who was also kicked off the Olympic squad. Team-mate Kenichi Tago, also found guilty of placing illegal bets, was taking off the Nippon Badminton Association's player list indefinitely.

Days later, photos of Momota - drink in hand - being intimate with a hostess in a KTV lounge in Japan emerged in a Japanese magazine, a development that did not aid the player's cause.

Said Park: "If you only have skills and good badminton, I don't think you can be a champion. Discipline - if it's not enough, then you cannot be world champion."

The South Korean, himself a former doubles specialist with two Olympic medals and five world championship titles, has coached the Japan team for more than a decade. He groomed Momota from a world junior champion in 2012 to become the star of the Thomas Cup-winning team in 2014.

Momota also became the first Japanese man to win a world championship medal when he took bronze last year, and had been tipped for Olympic success in August.

Park said his protege has come a long way from his junior years.

He said: "He is a very skilful player. Last time, when he was 18, he did not have enough power or speed but skills are good."

Japanese players and officials have been kept from commenting on the issue, with the media also requested to refrain from probing.

Said Park, 51: "Momota will be world No. 1 one day, but he has to improve and change his attitude. He has to change.

"(To be an) Olympic champion, a world champion is not easy. If he cannot change, I don't think so."

A version of this article appeared in the print edition of The Straits Times on April 19, 2016, with the headline 'To be no. 1, Momota 'needs to change''. Subscribe
Topics:
More
Whatsapp Linkedin FB Messenger Telegram Reddit WeChat Pinterest Print Purchase Article Copy permalink