SINGAPORE - A week after losing to Sourabh Verma in the final of the Hyderabad Open, Loh Kean Yew gained some measure of revenge by beating the Indian's younger brother Sameer at the BWF World Championships in Basel, Switzerland on Monday (Aug 19).

Loh, 22, said of his 61 minute clash against 24-year-old Sameer: "It was a long and tough match, we both started well in the first game but he was more consistent throughout the whole first game.

"I managed to pick up the pace in the second game and make sure I took control from the front net because the opponent's front skill is good.

"I was determined enough and persevered all the way in the second and third game even if we have long rally."

This has been a breakout year for Loh. He has reached three BWF World Tour finals in 2019. Besides his loss to 26-year-old Sourabh, he fell to Indonesian Shesar Hiren Rhustavito at last month's Russian Open. 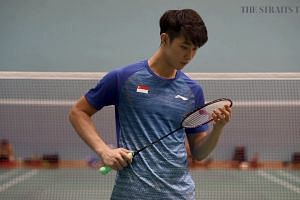 It's my rice bowl: National shuttler Loh Kean Yew on his racket

Memorably though, Loh beat Chinese great Lin Dan in the singles final at the Thailand Masters in January.

The victory against Sameer was a timely one, said Loh.

He said: "The win served as a morale booster for me as I was to perform better than I expected because I wasn't able to play well during court testing.

"I'm going to try to have a similar routine and prepare my game like how I prepare every game.

"I feel that my form has been quite good recently and I hope to keep it going and try to be as consistent as possible."

On his prospects against Rouxel, Loh said: "I lost to him the previously I played with him so I'm going to give my best and try to take revenge."