Grace Chua was not even supposed to play in the OUE Singapore Open yesterday.

The reserve shuttler was called up only the night before, after compatriots Chen Jiayuan and Yeo Jia Min's late injury withdrawals.

Yet, the 20-year-old Singaporean made the most of her chance to make her Superseries women's singles debut at the Singapore Indoor Stadium, and battled her way into today's main draw. 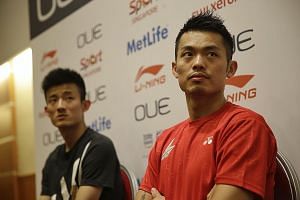 A delighted Chua said: "I'm very excited and glad to be able to play in this competition. It's unexpected.

"My goal was to qualify for the main draw. I just wanted to go in and try to have a good performance. So being able to compete tomorrow is a bonus to me.

"It's a recognition of all the efforts I've put in in the past year, especially when, for one whole year, I had almost no results to show for and it was disappointing."

Yesterday was vindication of her persistence in a lonely journey to play the sport. Her previous schools - Methodist Girls' School and Anglo-Chinese School (Independent) - did not offer badminton as a Co-curricular Activity (CCA) for schoolgirls, and attempts to start one were repeatedly unsuccessful.

Nevertheless, she refused to give up, and would join the ACS(I) boys for their thrice-a-week trainings.

She recalled: "There wasn't a girl to talk to, so it got quite lonely sometimes, but I wouldn't have changed it because I really love to play badminton."

Following her graduation from ACS(I) in 2014, she decided to put her university studies on hold while she trains full-time with the national team six times a week.

"You can study later. I cannot be playing the sport forever," she reasoned.

She hopes that this Open run would kickstart a change in her fortunes, saying: "Last year was a transitional year. Hopefully, from this year on, I will have better results."

While there was joy for Chua, there was anguish for some of her more seasoned compatriots.

Wong failed to make the main draw, losing 14-21, 16-21 to Lin Yu-hsien of Chinese Taipei in the second round of qualifying.

Mixed doubles pair Chrisnanta and Neo suffered a major blow in their bid for Olympic qualification - which closes on May 1 - after they lost 12-21, 13-21 to the Netherlands' Jacco Arends and Selena Piek.

Neo did not mince her words when it came to her performance. She said: "It's okay to lose, but we did not play up to standard."

A version of this article appeared in the print edition of The Straits Times on April 13, 2016, with the headline 'Reserve one day, main draw the next for Chua'. Subscribe
Topics:
More
Whatsapp Linkedin FB Messenger Telegram Reddit WeChat Pinterest Print Purchase Article Copy permalink