Having sealed the world No. 1 spot and a third straight title, she seeks Rio glory for Thailand

An erroneous line call meant her celebration was a little premature, but having pined her entire career for the elusive world No. 1 ranking, Ratchanok Intanon could afford to wait two more points.

With a primal scream, an index finger pointing high and a largely partisan crowd backing her, Ratchanok's coronation as the world's top shuttler was completed yesterday at the OUE Singapore Open.

Her 18-21, 21-11, 21-14 defeat of defending champion Sun Yu made Ratchanok the first women's singles player to win three titles in as many weeks. More significantly, it means the Thai will displace Spain's Carolina Marin as No. 1 when the weekly rankings are updated on Thursday. 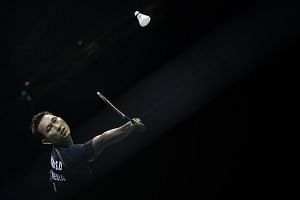 With so much at stake, Ratchanok worked hard during the match at keeping her shots measured and her nerves under control, but her emotion in victory revealed how much the win meant.

"I always train until I cry," she said after the match, recalling the toil she has put in over the years.

"I cry because I'm tired. My coach wants (me to do something) but I cannot do, and cry, because it's pressure on myself."

While being No. 1 will bring pressures of its own, for now, it has only given Ratchanok greater belief ahead of the Olympic Games. She will carry the hopes of the kingdom in August when she pursues a first badminton Olympic medal for her country.

FOR KING AND COUNTRY

Today I did it. I feel proud of myself... I feel like I made Thailand people proud of me, my family, my club and those who accompany me in training.

RATCHANOK INTANON, after clinching the OUE Singapore Open title and with it the world No. 1 ranking as well.

Said the 2013 world champion: "Now I'm more confident for the Olympics. I want the gold for Thailand."

She maintained all week that her body was holding up fine from three straight weeks of competition - she won the India and Malaysia events in the fortnight before arriving in Singapore - but Ratchanok admitted that fatigue finally caught up with her yesterday.

From making some appalling service errors to sending several shots way out, the 21-year-old handed her opponent several easy points.

She said: "(Sun) kept playing long rallies. I felt like I cannot play this style, (so) I try to play with more speed. Today I made many mistakes, my opponent too, (but) I came back into the match earlier than her."

Indeed, composure started to desert Sun as the match progressed, especially in the latter half of the second game when the Chinese world No. 14 was shown a yellow card for misconduct.

Said Sun: "I wasn't trying to waste time. I was leading at that point so psychologically, the chair umpire's decision did affect me a little.

"Ratchanok started to play better and I got flustered and ended up making mistakes."

The Liaoning native, though, was gutsy enough to challenge a line call even when 12-20 down in the rubber, staring defeat in the eye, and with Ratchanok and the crowd already celebrating.

It led to two more points for the Chinese, but only delayed the inevitable.

Said Ratchanok: "Today I did it. I feel proud of myself... I feel like I made Thailand people proud of me, my family, my club and those who accompany me in training."

Before yesterday's final, a new cover photo of Ratchanok was uploaded onto her official Facebook page. It contained a quote from the shuttler: "Now I feel I can be No. 1."