As Singapore Athletics (SA) announced its path to the sport's rejuvenation yesterday, which included the unveiling of three sponsors, national sprinter Shanti Pereira is also approaching the year with a new spring in her step.

The 22-year-old starts her season today at the Singapore Open Track and Field Championships at the National Stadium, where she will compete in the women's 200m and 4x100m mixed relay, and the women's 4x100m tomorrow.

The Singapore Management University undergraduate had suffered a grade two hamstring tear during the 100m final of the same meet last April. A recurrence of the injury in June meant she did not get much time last year to train for her pet 200m event, although she competed in both the 100m and 200m events at the Asian Games. She failed to get into the finals of both events at the Jakarta Asiad.

She told The Straits Times yesterday: "The aim of this meet and the reason I'm not doing both the 100m and 200m is because I want to focus on the 200m, just getting used to the curve.

The 2015 SEA Games 200m champion met the 100m qualifying mark of 11.76 for this year's edition in the Philippines when she clocked 11.74 at the Asean University Games last December.

"My preparations have been pretty good since last year, after the Asian Games.

"I feel I'm in the right head space, physically I'm getting stronger and I feel I'm ready for the season," added Pereira, who was third in both the 100m and 200m events at the 2017 SEA Games. 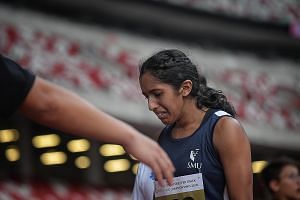 Then, she broke down in tears after losing her 200m crown. Her coach Margaret Oh revealed that she was affected by the infighting within SA's management earlier.

Yesterday, Pereira said: "These kinds of things happen in an athlete's career... I feel like I've been through a lot over the past couple of years and I'm not harping on it.

"I've been through all these things, so now I'm in a really good position to give it all I have for this year, next year and the years after."

The total value of the three sponsorships amounted to a six-figure sum, in cash and kind.

Tang Weng Fei, who is serving his third stint as SA president after being elected last October, is optimistic about the sport's future.

Referring to these results and initiatives, Tang told ST: "(This) is testament that what we have put in place so far is correct.

"Our target is really 2021 and beyond... I really hope these youth athletes can continue to improve.

Almost 400 athletes from 14 countries will be competing at the two-day Singapore Open, which is held concurrently with the final two days of track and field events for the National School Games.