JOHANNESBURG (AFP) - Caster Semenya won the South African 5,000m title on Thursday (April 25) but refused to discuss next week's ruling on whether or not athletes' testosterone levels should be regulated in a landmark case which could seriously impact her career.

Semenya, the reigning Olympic 800m champion, is set to learn her fate next week after challenging the International Association of Athletics Federations (IAAF) female track/field eligibility rules at the Court of Arbitration for Sport (CAS).

The South African wants a proposed rule change, which would force athletes with "differences of sexual development" (DSD) to keep testosterone levels below a prescribed amount, scrapped.

The rule would apply only to female athletes competing in distances between 400m and a mile.

"It's been quite a cold week, and I think it has built up over the last few days and I woke a bit tight and uncomfortable, so we decided not to take any risks," Van Niekerk said. 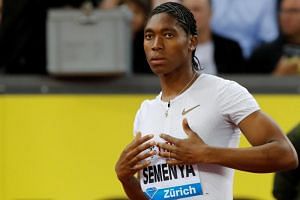 "I feel in good shape, and I feel capable of competing against the guys, but there is a long year awaiting and I want to make sure I can compete internationally."

The 26-year-old defending world champion injured a knee during a celebrity touch rugby match in Cape Town two years ago.