After past near misses, Theresa Goh gets it right with bronze in her 4th Games outing

He pictured the athletes arriving back at Changi Airport to a welcome party, with all the attention on Yip - and Goh being ignored for coming home without a medal for a fourth straight Paralympics.

"I didn't want Theresa not to have a medal when we got to the airport," he admitted.

Thankfully, Massey can rest easy, as an emotional Goh finally broke her duck on Sunday evening with a bronze in her pet event, the 100m breaststroke SB4 final.

The 29-year-old, who was born with spina bifida and is paralysed from the waist down, clocked 1min 55.55sec to finish behind pre-race favourite Sarah Louise Rung of Norway (1:44.94) and Italy's Giulia Ghiretti (1:50.58).

She had qualified second fastest, setting a personal best of 1:54.50 in the heats.

The bronze was sweet reward for Goh's indefatigable persistence, despite suffering near-misses during her four Paralympic outings.

Understandably, when she eventually found Yip on the sidelines of the Olympic Aquatics Stadium after the race, the two friends hugged and sobbed.

Later, Yip wrote on her Instagram account, together with a photo of her embracing a crying Goh: "The world needs to know how proud I am of you. You finally did it...

"You are now a Paralympic medallist after 17 years of training and perseverance. Nobody knows our journey like us and I am so incredibly proud of you." 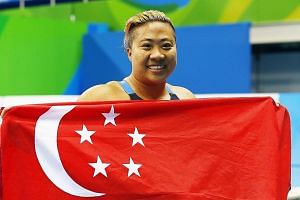 Indeed, the medal means the world to Goh. She told The Straits Times: "If I want something, I have to get it myself. A lot of people were telling me to be brave, and that was the thing I kept repeating to myself: To be brave." The world needs to know how proud I am of you. You finally did it... You are now a Paralympic medallist after 17 years of training and perseverance. Nobody knows our journey like us and I am so incredibly proud of you.

Even though Yip - who has muscular dystrophy - has won two golds, Goh insisted that there is no medal race between the duo.

"What's important is that you know the athletes have done their best to get to where they are, whether they win a medal or not."

Her parents, Bernard and Rose, both of whom are in their late 50s, arrived in Rio on Saturday to cheer her on, under the sponsorship of oil major BP International. "It means even more that I have my parents here to watch me win," Goh said.

The trio finally met after her victory ceremony, with Rose shedding happy tears as she hugged the oldest of her three children. Bernard, a general manager, said they were "definitely very proud of her".

Massey praised his charge's "phenomenal" swim, even though Goh admitted to feeling "kancheong" (Hokkien for anxious) during the final, which contributed to a slower time than she did for the heats.

The Briton said: "You can look back at the times, the starts, they don't mean anything. The only thing that counts is making it onto the podium, which she did. I'm really proud of her."

To hone her front-end speed, he had instructed Goh to swim the first 50m of her first event on Thursday, the 200m freestyle S5 heats, in breaststroke.

Goh was ranked last out of 12 swimmers, but it was a good trial in preparation for the 100m breast race.

Massey summed it up by saying: "Tonight is Theresa's night, she is the star of the night.

"This medal will carry her throughout the rest of her life."

Last night, Goh finished 14th out of 16 swimmers in the 50m freestyle S5 heats in 45.45sec, and did not qualify for the final. She has one race left, the 100m freestyle S5 on Saturday.